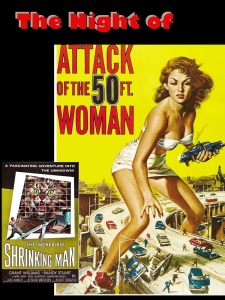 My girl friend and I usually had a weekly date to meet after work on Friday nights over at her family’s house. We sat on their couch and tuned in the Creature Feature – the late night scary movie. In between the ads for a local car dealer we got to see the likes of:

The Creature from the Black Lagoon

The Blob (inside of which was rumored to be Steve McQueen)

The Attack of the Crab Monsters (by the Sultan of Schlock – Roger Corman).

And many, many more…

For some reason (possibly due to their availability) none of the classic monster movies were broadcast. No Dracula, no Frankenstein, no Werewolf movies. On second thought perhaps it was because they were so much older than these titles – the 1930s versus the 1950s – the concern on the programmer’s part possibly being for more contemporary fare.

Sometimes long nights ensued as the fare put us both to sleep. Cue the Everly Brothers – Wake Up Little Susie, Wake Up.

We were excited to learn that one of our upcoming Friday nights could be spent at one of our favorite places. The Harvard Exit had a calendar program that they printed and made available in their lobby. And scheduled for a midnight show on Halloween was the double bill – The Incredible Shrinking Man and The Attack of the Fifty Foot Woman.

We bought our tickets and joined the midnight throng filling the seats for the sci-fi/horror fest. My friend from college Dave went with us. Dave with his scientific bent could be a bit of a Debbie Downer. He would speak right up when something occurred that was impossible – like explosions in outer space for instance, (that epic rant came out of a viewing of Silent Running). I don’t remember any gaffs pointed out by him in these two pictures. Trust me, had there been, he would have been all over them gleefully. But then again these flicks were more in the fantasy line and were not tied down to any hard science.

I wonder now if there was not a tongue in cheek ideology behind the pairing. This time was the era of the rise of feminism. If I was into conspiracy theory, I could posit that it was a manifesto of sorts, signifying the diminution of men and the elevation of women over them.