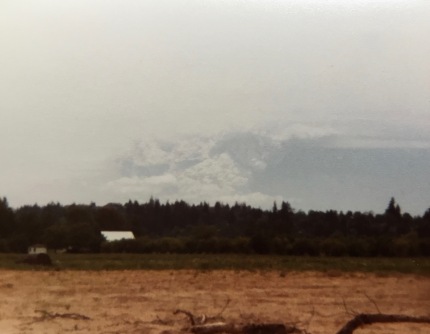 We moved from Renton down to Vancouver, Washington in February of 1980. Just in time to see a mountain go up in smoke.

My Mom and Dad were already living in the area. We’d been visiting them for a couple of years  – (more of an imperative from their perspective, as we now had a grandchild of theirs to bring on our visits).

My Dad worked with Tom Moyer Theaters in Portland OR, an up and coming theater circuit (my Dad had made a switch from General Cinema Corp back in 1977). He passed on the word to me that they were looking for a film booker to help in their film-buying department. Film booking was what I did at the Saffle Theater Service in Seattle, so I had the skills and experience. And thinking it would be a good move, I applied.

I got the job, and a whirlwind move ensued. In short order, we sold our home in Renton, packed up our household and ourselves, and trooped down I-5 to Vancouver.

(Aside – I think my book collection weighed more than all our furniture and our individual body weights combined. The moving company miscalculated on their estimate – which created a problem. Mr Moyer would only pay the estimated amount and refused to pay their final billing. I didn’t either).

We stayed with my folks while we were looking at homes, and were turned onto a property by my Mom who had a friend wanting to sell their almost brand new home in the Hazel Dell area. We put our signatures to the contract on March 15 (the day that a series of minor earthquakes began to shake things up below Mount St Helens, a snow-topped cone in the nearby mountains), and were safely nestled in our new house by the beginning of April.

Things really began to shake after that, or so they reported on the news. For we never heard a peep from within our home, or from my folks’ house – where we passed most Sundays for supper. And their house was one whole hill closer to the mountain than ours.

We didn’t hear it on the day Mount St Helens erupted either – Sunday, May 18, 1980. Again, we were alerted about the event on the news, and immediately went outside to look. And there right from their front yard we saw what looked like a column of smoke, belching forth from the top of the mountain, and rising up and up, out of our sight. It was drop jaw, awe inspiring.

And that was not the end of it. More eruptions followed in the next five months, including one that sent the ash our way (the original eruption had exclusively gone eastward).  I had to go up on our roof and scoop the ash out of the gutters by hand. It was surprisingly light-weight and silt like.

And it was getting everywhere. Advise was being offered to car owners to make sure extra precautions were taken to insure that carburetors were protected against its intake. (Imagine a full roll of toilet paper substituted for the regular air filter).

We missed the last big eruption in October of 1980. Our attention was focused elsewhere.

For on that day, our son moved the mountain off of our minds by his birth.