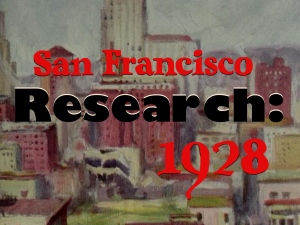 Sometimes when you research you come up with more than you were looking for; some little fact that is odd or interesting and usually completely off topic.

Recently I was trying to find out what film titles were gracing the marquees of the movie theaters in 1928 San Francisco. I found a San Francisco publication that covered the weekly cultural events in the city. A treasure trove.

Garbo, Jolson, and Barrymore (Lionel) were some of the big names on the marquees in that time period. Jolson was in the Jazz Singer, of course. Vitaphone is listed prominently for it, so you knew it was a sound picture (the first as you may know). Gloria Swanson was in Sadie Thompson (try saying that three times fast, and try not to say that Sadie Thompson was in Gloria Swanson). And Rin Tin Tin was starring in the film “Dog of the Regiment,” and also making a personal appearance with his trainer Lee Duncan.

And speaking of personal appearances I was blown away to see that Fanny Brice was performing on stage in San Francisco that year. (Barbra Streisand portrayed the entertainer twice, once in Funny Girl [1968] and the other time in Funny Lady [1975]). And I was amused to see that the Marx Brothers were on the boards, cutting up in their play Cocoanuts.

But there I’ve went and gone off-off topic.

What I wanted to get around to was this, the publication included schedules for the radio stations broadcasting in the area. So I have a list of these stations and their call letters [KFRC, KPO, KFWI, and KJBS] should I need them for my writing project. But what was really surprising were the two radio stations that were completely out of the area, yet received in San Francisco.

They were KJR in Seattle, Washington, and KGW in Portland, Oregon. I knew KJR as a Top 40 station from my high school and college days. Back in 1928 it carried dance orchestras and concert music. I am familiar with the KGW call letters as I live near Portland. Its call letters have disappeared from the radio scene, having morphed into KPOJ (operating now as a sports radio station, a fate that KJR has also suffered).

I am wondering if the denizens of 1928 San Francisco tuned in to KGW Portland to catch Mel Blanc on air in those days before Warner Brothers snatched him up to do voices for their Looney Tunes (Bugs, Daffy, et al).