Sometime in the summer of 1974 we took a little roadtrip. My wife and I packed up the Roadrunner and headed east. We stopped down in Renton and borrowed her parents’ camper trailer and hitched it to our car with the black racing stripes.

Before hitting I-90, we picked up my sister and her fiance to take them along for the trip. Our destination was Spokane and Expo ’74 which had opened three months prior. We sped along at the 55 mph speed limit set after the fuel crisis precipitated by problems in the Middle East the year before. We did not go into Spokane the first day, but set up the tent at a wooded campground somewhere west of the city.

The next day we left the camper trailer set up on its site and took the Roadrunner into town unencumbered. The fair had been built right in the center of Spokane along the Spokane River, on land reclaimed from blighted industrial and railroad properties. One of the sights was a clock tower left standing when the rest of the Great Northern railroad station was taken down. We spent the day walking the grounds or in the skyrides, seeing the sights. One of the skyrides went over the river falls and underneath the Monroe Street bridge, the same street that was the bete noir of my childhood when my family lived in Spokane.

The US pavilion had an IMAX theater which ran a film entitled “Man Belongs to the Earth.” This was in keeping with the stated purpose of the Expo, a focus on the environment. Chief Dan George narrated and appeared in it.

Of all the exhibits, I was most intrigued by the one offered by the Czechs which, oddly enough, was housed within the Washington State pavilion. Called Kino-Automat, its small auditorium was rigged for audience participation. Each viewer had access to two buttons. At a half dozen points in the film “One Man and His World,” you were given the opportunity to decide between two options as to what would happen next. The vote was tallied live on the screen before it continued on its way. A good thing it was a comedy.

We returned to the tent camper for dinner and to prepare for the evening event. We had tickets for the Spokane opera house, the largest venue in the Washington State pavilion. On its stage that night we saw Henry Fonda in the one man show Clarence Darrow. Our seats were in the balcony; so we had a fine, but distant view of chairs, a rumpled suit, a necktie and suspenders. And a very recognizable voice. The fact that it was a monologue did not help my attention span. It had been a long and tiring day, so at points I nodded off. We were soon to get a closer view.

When the curtain dropped, we gathered together and picked up the Roadrunner in the adjoining parking garage. At the moment we emerged down the exit onto the street, we almost ran into a passing limousine. We realized at once that Henry Fonda was sitting in the back seat of the limo. He leaned forward and stared out at us. We returned the favor, sped up and took this shot.

Thus ended our memorable day at the fair. 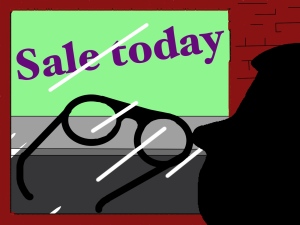 The Maxwell School was only a couple of blocks away from our house on the same street. Three things I remember about my school days in Spokane.
My teacher sent home a note to my folks to say that I was having problems keeping up in class. In her observations, she suspected that I was not able to read what she wrote on the blackboard, and advised taking me to an eye doctor.
This my mom dutifully did. And I hated every minute of it. More so when the finding came back that I was near-sighted and needed glasses.
The battle royale ensued when I returned for a fitting. I would not allow the doctor to place those things on my head for the necessary adjustments. The doc stood nervously by while my mom pleaded with me to cooperate. I stubbornly refused. Out of frustration she offered up the ultimate capitulation. If I would just allow him this once, I would never again have to put them on if I didn’t want to.
I acquiesced and when departing I triumphantly jammed the devices into my pants pocket.
We had taken a bus to the doctor’s office and had to wait at the bus-stop for our return. I don’t know what prompted me. Perhaps I was just looking across the street. I took out the glasses and put them on.
“Momma, I can see the Payless sign!” And I could actually read the words up on the street signs. Even the colors of everything seemed brighter, more vibrant. And my mother was happier too.
Another note came home. This time with the announcement of a time release program from classes once a week to attend a Bible class. I assume other faiths were included and with their own venue. I only know that I went to the Protestant one.
The class was held in an old downtown building, probably in something akin to a Masonic hall is my guess. (The Masonic meeting scene from Peggy Sue Got Married resonates at this point).
The vestibule was high-ceilinged and paneled in dark wood and wainscoting. A heaviness and dullness permeated everything. We were assembled in an auditorium and there received our instruction. And we each received little pamphlet size books of the Gospel of Luke. I don’t remember a single thing. The birds of the air were no doubt busy, for I am sure that seed was scattered, but for me it probably never hit the ground.
It would be years before I saw clearly.
In the words of the other song I was blind but now I see.
Stay tuned for the third thing.
1 Comment

Up until the time we lived in Spokane I always had a crew cut, that is, when I did get a haircut. Here we had a barber down the hill from us, one of whose specialties was Roman haircuts (think Spock from Star Trek or Laurence Olivier from Spartacus).  They were cool.
Our house in Spokane was two story, three if you counted the basement. I didn’t spend much time down there.  The stairway was wooden and creaky. Once down, it was earthen, floor and walls.  All that was down there were the washing machine, a slop sink, and clothes racks for drying.  No glowing furnace, a la Home Alone, that would have sent me back up the creaky stairs in short order.
My room was on the top floor. It was set in a dormer, and very narrow. I shared it with my brother and sister. I don’t know how we three kids all fit in there. Our beds must have been all lined up lengthwise along one wall.
From the one window at the end we had a view of the back yard, the parked Nash, and a small shed at the edge of the property. And a balcony seat the night the shed caught on fire.
When we looked out, the whole shed was engulfed and a nearby tree partially burning. Only partially because the fire department showed up in time to dowse those flames.  Luckily the Nash wasn’t touched.
The next day I inspected the site.  The smell of charred wood was strong, but I was fascinated more by the small glass window that had been in the shed’s door. It now laid on the ground looking like silk cloth in elaborate folds, as though it had melted in place and cascaded down.  It resembled the ribbon candy that we used to get at Christmastime.
We never found out what caused it. There was speculation that it had been set by a neighbor kid. It wasn’t us you can be sure.
I was over playing with matches by this time (except with those in the toy cannon a few years after this in Salem, MA – noted on a previous post). By then I was having my hair cut differently, with a part on the right.  And it’s been that way ever since.
Leave a comment

Dread was the word.
It best described my feelings whenever it was announced that we were going to drive up to my cousins’ house in Spokane.  But it wasn’t their fault. We liked our cousins. We just didn’t like what we had to go through to get there.
We lived on Maxwell Avenue and Cedar street on the north side of Spokane. The property was right at the edge of a ridge that looked over the downtown area.  And beyond downtown was the other hill upon which our cousins lived.
Come time to go, Dad loaded us up into the backseat of the 1953 Nash (which my father always cursed for having an inferior power plant). We made our way down to Monroe street and it was a straight shot from there. Straight down the hill to town and then up the other side.
The other side was our terror. The car made a “whump” as it hit the first incline and we were thrown back against the seat. And our father always made it worse as he would tease us with the exclamation that “hold on, we’re falling backwards.” As we looked forward out the front windshield, we could believe him for all we saw was sky.
The street leveled off at a cross street, but only momentarily, as another “whump” followed and the process repeated itself. And even then we weren’t out of the woods, a second cross street, a third incline and a third and final “whump.”
We arrived at my cousins with whitened knuckles.
Such are the fears of a child. Fears that were outgrown, then replaced by other more grown up fears.
Leave a comment