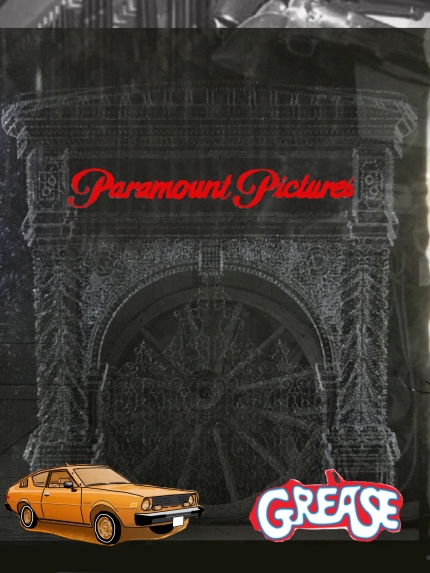 And not necessarily in that order.

Our itinerary for this trip started with a visit to Disneyland. (I was a little nervous after locking the car and leaving it in the Donald Duck section of the parking lot, having it fresh in mind what had happened to us in San Francisco. No one bothered it. Passersby evidently had more things on their minds than our little Plymouth Arrow).

While Disneyland is always a highlight, I found my excitement building at the prospect of our pending tours of Paramount and 20th Century Fox.

Our destination the next day was Melrose Avenue in Hollywood. This was the era of Barry Diller, Michael Eisner and Jeffrey Katzenberg at Paramount. I was not acquainted with any of them (and they sure didn’t know me). Our entree into the studio was courtesy of Joe Vigil, recently promoted from booker to branch manager of the Seattle/Portland exchange, working out of Paramount’s San Francisco office. (I mentioned Joe in my Zefferelli post).

After passing the gate we were remanded into the care of an ancient security guard. (He reminded me of a skinny old codger from Central Casting. You know, the one you see in all those old westerns). We three made up our own little tour group.

Our route mimicked a big square, circling the inside perimeter in a clock-wise manner. First stop was a small set in its own little building. It was a western jail. And since it’s use was ubiquitous it may have been a permanent structure. The guard had us walk before him, and straight through the iron doors into the jail cell. With a chuckle he slammed the door behind us and locked it. While thus incarcerated he reminisced about other past denizens of the premises. He assured us emphatically that John Wayne himself had spent time on this set.

We journeyed over into the western end of the lot that had one time belonged to another film studio – RKO Radio Pictures. A whirl of activity had its epicenter in one of the sound stages along its main street. The stage was given over to a small film project just getting its start, Allan Carr’s production of “Grease,” being directed by Randall Kleiser. Judging by the size of the group crammed onto its floor, some kind of tryout or rehearsal was taking place.

At the end of this street an open sound stage door greeted us. Inside all was quiet and deserted. And cool, for not a single light was on. Farm tackle and wagon wheels were the order of the day. This sound stage was dedicated for interior work on the TV series “Little House on the Prairie.” Filming for the fourth season was then underway, but more than likely all the action was transpiring somewhere off on one of the movie ranches for exterior work.

Our guide walked us through the “New York streets.” Nothing was shooting. So we got a good view of the various locations each street represented – SoHo, Greenwich Village, Brooklyn, Upper and lower East Sides, etc.

Next he led us through an alley alive with flying sparks and the sounds of hammers on metal. I could call it “gasoline alley,” for several cars were being restored and fitted for use in the Grease production. Tail fins flashed their stuff.

Last stop – or the last thing I remember at Paramount – was a small building stuffed to the rafters with guns. Gatling guns galore hung from the ceiling; hand guns, rifles and machineguns were arrayed about the walls, (with firing pins removed, if recollection serves). On a return trip to the lot at a later date, I learned that this armory was no longer there, but had been moved off site in 1979.

We did not run into any “stars” on our journey, but we were nonetheless satisfied at our look behind the scenes.

Our aforementioned return to the Paramount took place in the fall of 2006, and I will cover that trip at its appropriate time, sometime in the future, so stay tuned, and Watch This Space.

There were three weeks of rehearsals at the studio before principal photography started. It was made up of many elements and Howard Kazanjian was right in the middle of it.

As in his turn on Camelot, Howard was given charge of the stars in the morning call for Finian’s Rainbow. He would check in on them and ask about their needs (had they eaten, etc.). He had one actor this go-around that gave him no end of problems when it came to his make-up call. Don Francks had an attitude problem (it nearly cost him his role in the film). [Howard  – he was not likable – he had that STAR mentality that sometimes infects performers. It went like this – on a first film an actor would talk to you – by the second, you had to knock on his door – by the third stage, who are you? Francks had jumped to the third stage in this his first major film].

On the other hand, Fred Astaire was grand. He and his choreographer Hermes Pan arrived early on the set and would spend the whole day, rehearsing, rehearsing, and more rehearsing. At first the songs were all pre-recorded versions. Later they added a live piano on the set. Howard was in awe of Astaire’s “dance ethic.” Fred was dedicated and meticulous (in his old RKO and MGM days, Fred was known to have rehearsed some numbers for six months before committing it to film).

Astaire had some disappointments along the way in the production of Finian. Fred had preferred one of his experienced dance partners, Barrie Chase, in the role of Susan the Silent. Instead, Coppola opted for a younger unknown dancer, Barbara Hancock (Howard – she turned out to be a real trooper – in the dance number in the rain – Barbara persevered despite suffering from the flu). But his biggest disappointment was the loss of his long time collaborator, Hermes Pan. Coppola let him go half way through production and replaced him with someone far less experienced. Fred didn’t fight it, philosophically he chalked it up to the prerogative of the director. Still, it was a blow to Fred and may have bled into his performance. Howard noticed that the solo dance number that Fred performed in the barn seemed flat and unenergetic [Howard – I had watched him dance his heart out all day long in those rehearsals. He was much more agile than that. He could have done much more and better!]

As part of the rehearsal process, Coppola had a table read through the whole script, just with the principals. And as an additional aid, they booked the rehearsal hall on the WB lot and did the whole show, a full-blown “Broadway Musical” – just no sets. Coppola even brought in his father Carmine to provide the music accompaniment. Howard was the stage manager, cueing everything, including the lights from his place in the theater seats. This was an important step for two reasons. One, Francis got a feel for the flavor of the whole production; and two, the cast got a feel for how all everything fit together, a crucial understanding, especially as they entered film production and its need for shooting out of order.

Be sure to catch next Wednesday for “Under the Spreading Cement Tree,” the next post in The Adventures of Howard Kazanjian.