Rumble and I passed a miserable night waiting and hoping to see our friends again. Several times I nearly gave in to Rumble’s plea and summoned Merlin. But oddly I felt restrained from doing so by a sense that I cannot put into words.

I did, however, compose a message to the High Fairy. And at the moment I finished it Dunfallon returned.

He was disconsolate. He dismissed his eagle without a word of praise for its efforts. Something not at all like our pixie.

When we pressed him for details as to what happened, he only said that he also lost sight of Noralei soon after he started his pursuit. He followed the stream as it became a river, all the way to a large body of water into which it flowed. And he exhausted himself chasing thousands of flashes of silver churning the waters there. All to no avail.

Then at the urging of my pendant I announced that we were going to press on to that body of water. 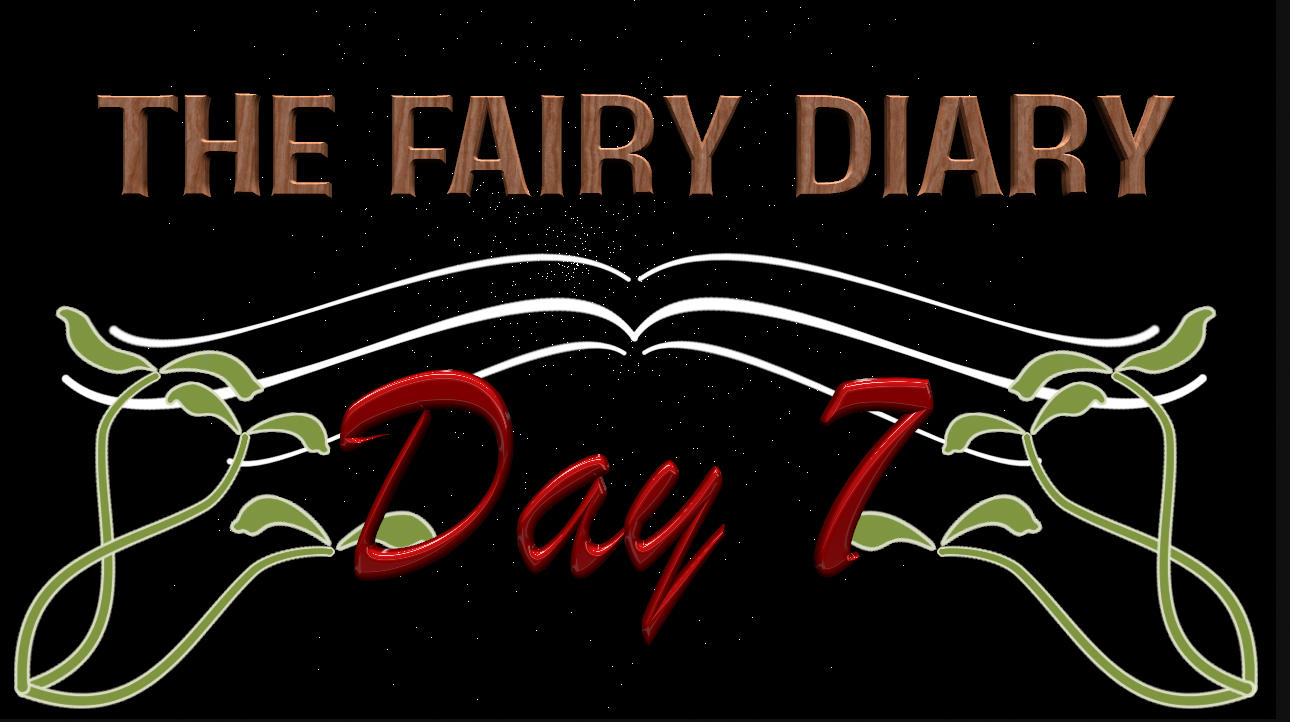 I arrived early in the council chambers and placed my note of apology at the Rumbletwist’s place in the circle. He was not yet there. The High Fairy, though, was. And he nodded his approval from across the chamber.

Soon after we were all gathered together, except Rumble.

The High Fairy motioned to begin the meeting and was interrupted by the captain of the guard.

In the excitement that followed I was thoroughly confused. It seems everyone knew what was happening except me.

As our leader later explained it, the captain of the guard had been sent to arrest Rumble, only to discover that he had fled.

And I am charged with his pursuit.

We have left the patrol and our false friend far behind. The latter whimpering about being abandoned and blind on the mountain path. I was sure that his friends would soon rescue him.

We came about to our original heading and pressed on. And we saw no one in pursuit the rest of the day.

Elijah and I conversed as we went along.

More and more there were signs of the drought deepening. This underlined the importance of convincing Sy and Jordan to bring their people into the safety and security, and yes, to an abundant supply of water offered in the hiding place.

I then finally told him about my dream. The dream of the rising tide of blood.

It wasn’t a critter or a pesky villager outside our camp this morning. Both Elijah and I startled at the sound of Jezer’s voice wishing us a glorious morning. We rose and greeted our friend, who asked after us and we in turn after him and the others. In particular we were keen to know any news about his search.

He did have news on that score. He and Quasimo had at last located where Raj G’s people were being held. They still form a group and fill an entire prison on the other side of Jerusalem.

This put us in a dilemma. Should we drop our current pursuit in order to go to the rescue of the imprisoned group?

Come morning I thought it time to shake the dust from our feet and move on. Elijah concurred in my assessment, but Quasimo was unwilling to leave as of yet.

Elijah and I considered continuing on without him. We were out of danger in so far as pursuit was concerned. And we had no real need for his guidance anymore, but we both sensed that he needed ours. Or more to the point he knows not how to follow the lead of the Spirit and we felt the responsibility to be sure that he knows before we part.

We then decided simultaneously that we had to be sure ourselves about our next move.

So we felt no guilt in staying.

I puzzled over the meaning of Mei’s dream. Even after Elijah pronounced it sound advice. Right up until the time that Jordan led the last group out of the way station. It was then that understanding dawned in a rush.

Our small group will remain behind to cover the tracks of Jordan and his people, and hold off any pursuit.

I couldn’t say for sure from what quarter they will come at us. Yet I strongly suspected that we needed to watch the skies.

When silence fell over the camp after Jordan’s departure, Elijah put us to work dismantling all the rigid structures.

Tomas hasn’t known what to do with himself the past few days. I suggested he avail himself of one of the places set apart around the camp for times of meditation.

This was all news to him. He explained that he usually prayed as he scouted. And he missed that time out by himself with the Spirit. But he has hesitated going beyond the bounds of the camp here on that pursuit, seeing that no one else did.

He wishes now he had asked someone at the beginning. I agreed with him saying that we often don’t find what we’re looking for, when we don’t ask.

Later the Captain sought Elijah and me to talk about our departure for Jerusalem.

The Captain mounted a special lookout to monitor our rear quarter. So far no sign of pursuit.

He has also decided to strike out in a roundabout course to our next destination by abandoning the usual shipping lanes. It will take a good deal longer.

Tomas is not so sanguine that we are invisible to them. He tells me that we cannot know for sure whether or not they have replaced the satellite coverage over this region.

When I was sharing his concern with the Captain, I realized that they already have a record of our next port and would have no need to follow us directly.

The Captain had considered this, and has plans to skip the next port.

One plus about this jungle – we do pass other travelers, and thankfully none of them are officers of the global government. They are either merchants or peasants traveling to or from the metropolis.

Elijah queries each one upon encounter about Hamashiach. But so far all have hurried on, expressing no curiosity by asking any questions in return.

One merchant even became belligerent, and would have struck Elijah except that he clearly saw that Elijah’s staff was bigger than his.

With a snarl he continued on towards the metropolis.

I am sure he fully intends to report the encounter to the authorities.

But we should be through this jungle and well on our way before anyone can get up a pursuit.

The two incoming vessels made no moves to block our exit. This heartened us and caused us to re-evaluate. Perhaps we were misreading our situation.

The robotic warship was riding station a good distance away and showing no signs of interest in our movements.

The Captain ordered the ship to half speed as the distance closed, and on his mark Tomas set a new course in an easterly direction.

The warship continued to ignore us, as our ship picked up the pace to cruising speed.
Our sense of relief grew with the new day and no signs of pursuit. I fell to contemplating other things.

What was it that Emil had given in trade for these three cargo containers?