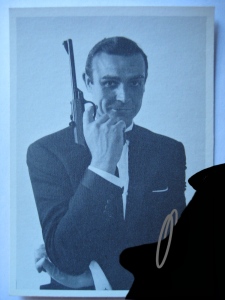 As I related before my father held down two jobs in Salem, one as driver for the Salem Laundry and the other as assistant manager at the Paramount Theater. Around about 1964, an opportunity came to him to apply to a new up and coming theater circuit – General Cinema Corporation of Boston. They were the proponents of twin theaters, two cinemas served by one common lobby between them. (My father tells me it was all an accident. Their plans for a single screen cinema in the Peabody Northshore Mall, included a bowling alley and a restaurant.  When no takers came forward for the restaurant, someone in the home office of GCC proposed making it another screen instead. And the rest is history). The plus side, with two films running, the chances for success doubled.
The plus side for my dad – only having one job. For he got the position, and started at this complex in Peabody, just north of Salem. What it meant to me, was a whole new venue to watch movies in, and like the Paramount, for free.
My dad has some photos taken in and around the theater for special events. One clearly shows my brother and sister sitting in the front row for a re-issue of Cinderella. The opening day festivities were accompanied by a Disney artist and Clarence Nash, the voice of Donald Duck. Where I was, my father can’t say.
If it was summer, I was probably next door watching Sean Connery. For that was the summer of Bond, James Bond. This was the beginning. Dr No, debuted in 1963 followed by From Russia with Love in the spring of 1964. Someone at United Artist had the bright idea to pair them up for the summer, and the Peabody Cinema played this double bill. (Cue – James Bond theme). It went gangbusters, and held over week after week. And I was there to watch them every Saturday.  After the thrill of the first viewing, it was fun to sit there in anticipation of observing the crowd react to their first viewing.
The following year, I started my bubblegum collection of Bond cards. This first series was in black and white and covered the first three films. Of all my card collections this is the only one that is complete.
Advertisement
1 Comment