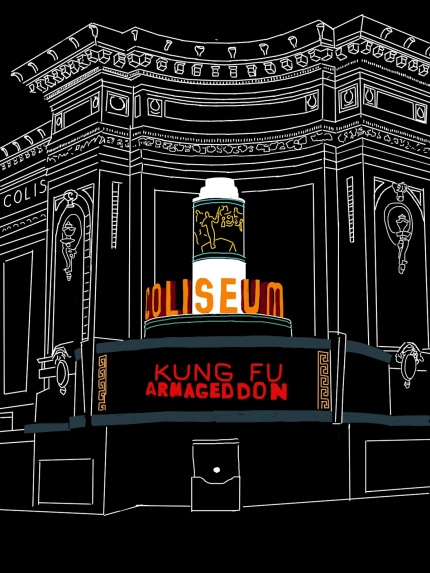 I have mentioned the Coliseum Theater in Seattle in two former posts, filed in the “Memories” category, but have not yet spilled any ink (nor emitted any electrons) describing it. When it opened in 1916, it had the distinction of being the first theater in Seattle (if not the entire country) specifically designed for showing film. The secret was in the floor. The design called for a curve to the floor of a sufficient pitch that one had a clear sight line over the people in the row in front of you – not unlike the theory behind the stadium type seating that revolutionized movie theater design in the 1990s.

Another strange detail about its design – was the lack of stage space – it was tall and wide, but had no depth. The screen was mounted on that shallow back wall. (I understand from my research that this was a choice by the owner at that time – Alexander Pantages, who, though his was a vaudeville circuit, intentionally cut down on the scale to save on the number of musicians and stagehands he had to hire).

By this time – the mid-70s, there were no muscians (except for those neon ones up on the revolving sign above the marquee), and there was one lone stagehand. Or half a stagehand, as they shared one with my theater the Fifth Avenue up the street. (Again this was the redoubtable Walt Coy).

Gone for the moment were the big Hollywood productions from the Coliseum’s screen. Instead the invasion of violent Hong Kong Kung Fu flicks and blaxploitation bombshells exploded daily in its auditorium. As a consequence the company thought it prudent to have a bouncer on hand to control any instances of patrons imitating the bad behavior of their favorites up on the screen. Into this latest incarnation of the Coliseum stepped my bride of just a few months.

[Aside – My uncle Bud was then the manager of the theater. She had worked for him when he was assistant to my Dad at the GCC Renton Village Cinemas. He knew what a great cashier she was, and hired her, no nepotism required.]

The box office in which my wife spent most of her time, was out in front of the entrance, situated at the corner of Fifth and Pike. It was literally all by itself – an island – cut off from the rest of the building. One gained entrance by stooping over and waddling through the low half door – the only way in or out.

All went well until the night the projector broke down. My uncle announced to the patrons inside that the problem could not be fixed and that they could repair to the box office and there receive passes for another day. They soon surrounded my wife, sitting in the glass fishbowl that was the box office. None of them wanted a pass. They all loudly demanded their money back. Strangely, to a man they all argued that they were from out of town and only in for the night, and would not be coming back any time soon. It felt to her like a riot was about to break out.

Before that could happen, the Coliseum bouncer stepped in. His name was Bobby, a black, ex-prizefighter from Chicago. (The rumor circulating the district had him on the lam from the Windy City, hiding out from a vindictive mobster). I had heard of the description “caulifower ear” before, but had had no concept of what that even meant – until I saw Bobby – and that vegetable like appendage attached to his head. Even then it was an afterthought to your consciousness, as he had an overwhelming presence. To call him “solid” is an understatement – more like a brick wall in motion. Yet for all his power and mass (and cauliflower ear), he had the sweetest and gentlest temperament.

He soon had things in hand, and when through, escorted my wife from the Coliseum to my theater.

My wife was shaken, understandably. And I did not object nor try to dissuade her when she decided to resign the next day. (She soon found a job at Virginia Mason Hospital, where she was the one weilding a knife when surrounded by carrots and celery).

We still paid an occasional call to the Coliseum. Shortly after this time, its bill of fare changed and a couple of back to back blockbusters settled in. That is where we caught The Towering Inferno, followed six months later by Jaws. The Coliseum was the only place to see them in the Seattle area.

And still under the protection of Bobby.