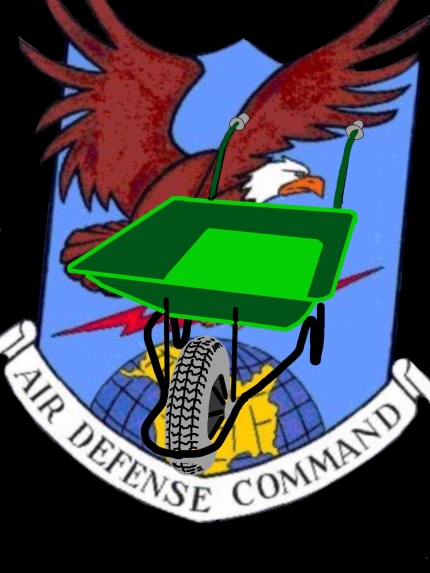 When my Father enlisted in the US Air Force in 1951, he reported to basic training at Lackland AFB in San Antonio TX. It was a rough time. The Korean conflict had just broken on the scene and over 100,000 men were crammed into a camp meant for 20,000.

Their uniforms were all WW2 issue – Army Air Corps khaki. The new blue uniforms for the recently separated service arm were not yet available.

In addition food was scarce and the men were always hungry. So after basic Dad was not unhappy to be assigned to the cooking school. All those similarly appointed made their way to Fort Devens in Massachusetts. There all the hungry enlisted men who had suffered through basic in San Antone were pleasantly surprised to see a mess hall flowing with “milk and honey.” Six weeks of training in their specialty ensued.

His first orders were for Larson AFB in Moses Lake WA which he reached via Payne Field, north of Seattle.  Dad in his capacity as cook was assigned to an AC&W squadron (Aircraft Control & Warning). These were special radar units were a part of the Air Defense Command (ADC), set up to give early warning about the approach of enemy airplanes. These Washington State sites were tasked to be on the lookout for Bearcat Bombers expected to be coming over the pole from Russia (the USSR). A squadron each was placed at a series of a half dozen bases that ringed the atomic facilities at the Hanford nuclear reserve in the tri-cities area of the state.

Other ACW squadrons were mobilized for service in Korea to do the same function at the air bases there.

From Larson he was seconded to another base, but only spent one day there. He was told that someone had read his orders wrong and that he should have been sent to Colville WA instead. They turned him around, however, and sent him back to Larson, as the new base outside of Colville was still under construction.

Having time on his hands and being curious, my Dad got a hold of some maps and checked out where the town of Colville was located.

When the orders came through for the squadron to proceed to Colville. The Master Sargeant asked the men assembled if anyone knew where Colville was. Dad spoke right up and said he knew the way, the fruit of satisfying his curiosity earlier.  So the Master Sergeant had the PFC join him in the lead car of the convoy as they headed for their new duty station.

They arrived in Colville hungry and pulled up in a line on Main Street. Having scoped out a place to eat, Dad again volunteered, this time to guard the cars and trucks. A lot of locals and looky loos stared in wonder as they passed the parked convoy, pondering what had come to their fair community. (There was very little in the local press about what the military was doing up on the mountain. Their equipment and mission was top secret).

They took the Tiger Road out of town, and over Squaw Creek up to the mountain where the base, at least as far as personnel goes, was ready. The radar installation had not yet been completed, but it would be soon.

Knowing that Colville would be the only place nearby to meet girls, my Dad came up with the following stratagem his first furlough there. Walking down the street he ran into some children, he opened his ploy by asking one of the boys if he had any big sisters at home. When the answer came back in the negative, he switched gears. Did he have a babysitter. Yes, he indeed did have one, and he led my father straight to the house where she lived.

My Mom answered his knock at the door. This being a small town out west in the early 50’s, if a man in uniform appeared on your doorstep, hospitality required that you invite him in. So she did.

She was home from school that day, looking after her younger siblings. Their mother had just passed away the week before. She entertained the young airman by playing the latest 45s on her record player. So the music of Eddy Arnold, Tennessee Ernie Ford, Patti Page and Bing Crosby’s version of Harbor Lights formed the sound track for their courtship.

They were joined in wedlock six months later. And for the shivaree (a quaint custom that takes various forms along the frontier in the US) he was made to push his new bride down Main Street in a wheel barrow.