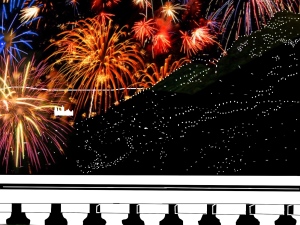 EXT VERANDA OF A VILLA – MEXICO CITY 1866
Lights sparkle in the distance like diamonds sewn into a mantilla and thrown over the rounded curves of the hills that rise from the city below. In full uniform, Lon stands at the rail, stone-faced and staring into the glow of fireworks shooting up from the central plaza. The sounds of festival time strike no chord in him.

CLAY
Peso for your thoughts, Commander.

CLAY (CONT’D)
My condolences on the passing of your father.

LON
(without turning)
Thanks.

CLAY
Are you okay?

CLAY
Living in a foreign country can do that. Cheer up, you’ll be going back soon.

CLAY
No one blames you for what happened. Well, almost no one. You did a great job and I hear that your design for our vault is pure genius.

LON
Thanks. I did what I could.

Jesse James barges in, drink in hand, which he gives to Clay to hold while he pumps Lon’s hand.

JESSE
(looking over his braid)
Well, commander, aren’t you a sight for sore eyes!

JESSE
I hear you’re coming up to my spread soon.

Surprised, Lon looks to Clay for an “okay” to answer. Clay nods his approval.

LON
If you’re near where we’re building the vault–

JESSE
I just bought me a ranch, not more than a stone’s throw away.

CLAY
Mr. James has taken it upon himself to see to the security of the area.

JESSE
Yeah. And you’ll be glad to hear I’ve got an old pal of yours working for me. Your old shipmate Louis.

INT ABBY’S HOTEL ROOM – MEXICO CITY – MORNING
The early morning tropical sun cheerfully bathes Abby in its glow. She has her laptop open with the web browser logged onto her e-mail. She attaches a file to her note to Ben and clicks the send button. She powers down immediately and pops out the LAN card and turns to give it to Letitia Slidell.

ABIGAIL
Thanks, that was a real lifesaver. I have no idea what happened to mine.

MRS. SLIDELL
My pleasure, dear. I also feel fortunate to have made your acquaintance. What brings you to Mexico City, if I may ask?

INT INTERNET CAFE – NANTES – NIGHT
Riley packs two espressos across the crowded cafe to the counter where Ben is tapping away on the laptop.

BEN
(looking up)
Any leads on cemeteries?

RILEY
The barrista tells me that the only ones with Americans buried in them are up in Normandy.

BEN
Wrong war. Well, good news from Mexico, Abby has sent us another decoded section of the journal.

Their tattooed and pierced neighbor, a stunning brunette in Goth makeup, CECI POMPADOU, leans over to Riley.

Riley takes one look at her and gets tongue-tied.

BEN
No. We’re here on business.

CECI
(keeping her attention on Riley)
Me. I am a tour guide. I know all there is to know about Nantes and Brittany.

BEN
How many cemeteries are there in this city?

Ceci turns to her laptop and motions to them to join her.

CECI
Quelle est… Is there a certain name that you desire?

Ben turns their laptop towards her and points.

BEN
I believe that this inscription may be on the grave we are looking for.

INSERT OF INSCRIPTION
Don’t look for DeVeer He ain’t here.

CECI
A family name of DeVeer? Sounds Dutch.
(she clicks away)
The Riviere family crypt at St Berthold’s lists that name.

A look passes between Ben and Riley.

RILEY
How much do you charge?

CECI
It is but a small thing. How about an espresso and 200 francs?

Riley dutifully goes in search of an espresso for her.