It was 1968. The job of Production Assistant as a title was non-existent. The thankless job of putting together call sheets, and delivering them, keeping all the records for personnel hours and things used, and doing all those little things that lubricated the process behind the scenes fell to the assistant director instead. If a chicken were checked out for the day for a shot, Howard Kazanjian recorded it. Somewhere today there rests in the WB archives for such things, those hand written records put together faithfully by Howard.

You would think that you would need a bunch of these minions running around to insure everyone was reached in a timely fashion. But the number of ADs on a film wasn’t at the whim or even prerogative of the director, but rather wholly under the rule of the deals negotiated by the studios with the guilds. When it came to ADs numeric factors trumped all else, and the numbers for Peckinpah’s new project – The Wild Bunch, dictated that it be limited to two.

So why are there six ADs listed in IMDB for the Wild Bunch?

Just because a maximum of two was dictated, that didn’t mean that the director had to keep them if he didn’t like them. And Sam Peckinpah found a multitude of reasons to fire his aids. A chore after the decision actually left to his production manager, Bill Faralla – (and that all without even an explanation). Howard was the only AD that was not fired by the fiery director. So why is he not listed on the credits that appear in the film itself? His title of Second Assistant Director was a category at that time that was not authorized in any title scroll.

One of the few exceptions to this dictum, involved Howard himself just the year before. He did such a bang up job on Finian’s Rainbow that the producer fought for, and succeeded in getting him a credit on that title.

The first casualty among the AD ranks was the 1st Asst, Phil Rawlins. He had lots of experience on TV westerns.  He was a rodeo cowboy who first worked as a stunt man, then as an AD – in shows like Rawhide, Gunsmoke, Maverick, and now more recently on F Troop, in which he moved up from AD to associate producer. For whatever reason he was let go before the first day of principal photography. All he was told was that his replacement would be arriving in the morning.

As things panned out, this left Howard as the only American AD when the first cameras rolled.

Up next Wednesday, the next installment in the Adventures of Howard Kazanjian – First Day of Shooting at Anything that Moves. So stay tuned and Watch This Space. 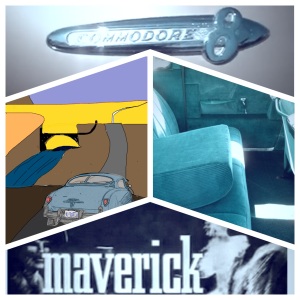 My dad likes to drive. He drove truck on the weekdays (as I have noted), and come the weekend he loved taking us on outings in the family car.
He also likes Hudsons. First there was the 1949 Hudson Supersix, then the 1950 Hudson Commodore 8 – always used cars by the time we had them, of course. The Commodore was the one that I remember the best. In the back seat – kid territory – there was a wide drop down arm rest for adults, which was just wide enough for a child to sit comfortably on. This was usually occupied by my sister, the youngest and shortest of the tribe.  My brother and I were to either side of her.  There was ample room. No car seats or seatbelts to restrain (or protect) us.
Sunday was the usual day of the week for these family outings.  Mom would pack a picnic lunch; dad would load us into the car and we would set off for a drive around the county or even farther.
My view took in what was on the right side as we moved forward down the road. The wind through the open window beside me, made popping noises that I heard and felt against my cheek. I imagined a throng of photographers setting off a barrage of flashbulbs all focused on my childish profile. It was a Walter Mittyesque daydream of fame.
Lunch usually marked the extent of our journey for the day. From there we would begin our trek back home. Not always by the same route.
I remember one occasion following along the bed of a canyon and paralleling a river and a set of railroad tracks. It all looked like a scene out of a western. A freight train was ahead of us, going the same direction. And we were gaining on it.
As we pulled abreast of the caboose we could see the conductor waving at us.  We waved back.
My dad stepped up the pace and we were soon beside the engine. I scanned the horizon ahead, nervous that there might be a crossing. There wasn’t. The engineer let off two blasts on the whistle in salute.  We again waved and my dad honked twice in return. Then the mighty eight cylinder pulled us ahead and away from the train.
Dad had a date with Mom to see Jimmy Garner as Bret Maverick.  And we had a date with our beds, as the pale rising moon tried to keep up.
Leave a comment