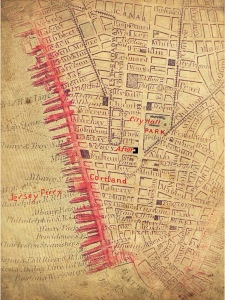 A note about railroads of the period – they were wide-spread, especially east of the Mississippi, and the war would develop them further when their strategic uses were realized. But they were usually just lines between two cities, you would come in on one line to a terminal, cross the city on foot or some other conveyance to another station and then take another line to your next destination. It is this distinction that when grasped will go a long way in understanding how the events unfolded as they did.
E T and the Eighth regiment MVM left Boston from the Worcester station. They passed through Worcester, then on to Springfield. There one more company met up with the regiment – the Allen Guard of Pittsfield, Massachusetts. They had come in on another train. The Allen Guard became Company K, assigned to lead the left flank of the regiment.
It was after 10 o’clock at night when the now completed regiment departed Springfield for New York City.   They travelled the entire night; a long sleepless night.
They arrived around 7am at the New York and New Haven depot at the corner of Fourth Avenue and 26th Street. It was another whirlwind, with no time to take in the sights. The local hotels feted them with breakfast, (the Zouaves were the guests of the famous Astor Hotel). By 11am the regiment had reassembled in City Hall Park and marched from there through crowds of well-wishers to Courtlandt Street. At the river they caught the ferry to Jersey City.
The rumors about what lay ahead were growing.
Leave a comment