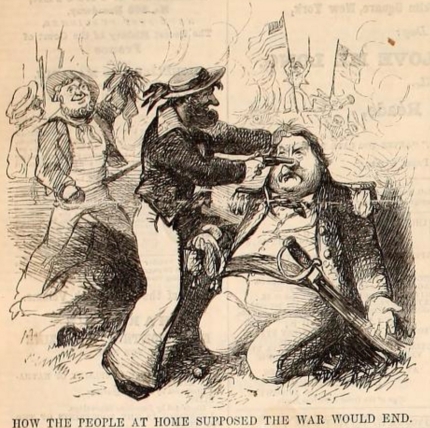 My request for scans of the letters and other documents in the Alice Whitfield Hand collection at the University of the South has been filled. I have read through the biographical information and the letters for 1858 and 1859. And I now have some answers for some of my questions. Along the way, I have learned a few more things. And, yes, I even have more questions.

My guess about the vessel that Bayard Hand shipped out on for the expedition to Paraguay was indeed correct. He served on the U.S.S. Southern Star. He postmarks a letter to her from almost all the ports they stopped in on the way down – Barbados, Pernambuco, and Rosario. His brother in law C. T. Quintard dropped her a line and kidded Alice about Bayard’s role in the expedition by comparing him to a sailor in a cartoon in Harper’s Weekly, who is shown poking a pistol in the face of the Paraguayan dictator Carlos Antonio Lopez.

The biographical information attached to the letters lends support to my surmisal that Bayard and Alice met in Beaufort NC at the time when he was serving with the Coast Survey. Her father had lost his business in Halifax County due to a fire in 1851, and moved the family to Beaufort to build another inn or boarding house. So they were well established there by the time Bayard was back from the Brazil Station, and visiting Beaufort in Coast Survey vessels. Shortly after their wedding in September of 1858, Alice’s father picked up his business and removed back to Halifax County (hence the census entries recorded there for 1860).

It would appear from a number of sources that Bayard Hand had a weak physical constitution. Both times that he was sent to the hospital during his short time at Annapolis, the stays (one in 1852, and the other in 1853) were for longer durations than would be normal for the particular ailments. The year 1858 was marked by at least two serious episodes. In June he was admitted to the naval hospital in New York – not for the fever that he had had when recently down in Florida, but for a nervous condition that the physician said was due to a lack of sleep. It wasn’t until after four days that the doctor noted that Bayard was finally sleeping. He was kept in the hospital a total of seven days. And in November, when the U.S.S. Southern Star left Norfolk, Lt Bayard was in a doctor’s care, unconscious for eight straight days with no other diagnosis. So it does not seem as surprising for him to die a victim to a simple bout of pneumonia.

Alice, as the young widow, inherited from her husband. His family in Rome Georgia saw to it that she received the stock shares that were Bayard’s from his grandfather’s business, the Roswell Manufacturing Company. This would explain the rather large amount listed for her personal estate in the 1860 census. She also received his naval uniform. The uniform was kept in Alice’s family and passed on to her descendants. The cloth has wasted away, but the buttons, the epaulets and the bicorn hat remain.

There was one disturbing missive among the manuscripts. C. T. Quintard had written to Bayard days before the lieutenant’s death (Quintard was not aware of his illness). Evidently, Bayard had confessed a moral struggle to the Episcopal priest at the family home in Rome after his return from Paraguay. Quintard pleads with him in the strongest terms to forsake an unnamed vice. I confess that I became quite concerned for the state of the lieutenant’s soul, knowing the proximity of his death.

And that’s the way with research. You end up knowing some, but never all.

After reading the article about Lieutenant Bayard E Hand in the History of Rome and Floyd County, I confess I was dissatisfied that his wife’s name was not included. I was curious to find out who she was and what had happened to her.

At the first it was difficult to come up with her name, mainly because of the incorrect details in the article. Searches beginning with his name, tied to the state of Virginia as the place of marriage, coupled with an 1853 date (his Academy graduation date) proved fruitless. When I eliminated those secondary datums and concentrated on Bayard Hand I got several hits with marriage data for him – indexes, posted bonds and licenses – all with the 1858 date. And the name of his bride was Alice Whitfield.

To learn more about her it would be crucial to find her parents, and with that knowledge locate her in the federal censuses – 1850 the one before their marriage and 1860 the one after Bayard’s death. A family tree revealed that Alice’s father was William Thomas Whitfield (1819-1909) and her mother was Mary Elizabeth Crump Squiggins (1812-1880). The extra names listed for her mother proved very helpful in verifying the correct William Whitfield, for there was more than one possibility in each of those census years. Crump was her maiden name and Squiggins was the name of her first husband. So, the innkeeper “Wm. Whitfield” and his wife “Mary” in the 1850 census for Halifax County, NC are the correct ones – besides the three younger Whitfield children, four older “Squigings” children are noted.  But an “Alice” is not listed. Since she was born in 1842 she would have been eight years old at this census. There is an eight year old Whitfield daughter in this household, however her name is listed as “Temp.” I suspected they were one and the same, and was able to confirm it when a search on the Squiggins name turned up a family Bible in which her name is listed as T. Allice Whitfield. (Her marriage to Hand is also recorded in this same Bible, so a double confirmation). This coupled with the knowledge that her paternal grandmother’s name was Temperance, led me to conclude that her full given name was Temperance Allice Whitfield. From her marriage records forward she must have dropped Temperance and in some cases the second “L” from Allice.

All of this information made it easy to isolate the correct 1860 census record. Her father W T Whitfield was still a Hotel Keeper in Halifax County NC. Her mother M E Whitfield is there with her brother and sister; and Alice herself is listed as Allice Hand. Of note, Allice had a personal estate of 4000 dollars, forty times what her father possessed. I know from probate records that Bayard died intestate, and that Bayard’s stepfather must have seen to it that she was cared for out of her husband’s holdings.

So, what then happened to her after this?

The only record for Alice Hand after this date is the marriage bond that lists Alice W Hand marrying Julius Burton Timberlake in Halifax County, NC on November 5th 1863. Together they had five children, a son and four daughters. They named the first daughter Annie Bayard Timberlake, a touching tribute to her first husband. And Alice’s grandson Julian Burton Timberlake Sr. attended the Naval Academy and served in the First World War, rising to the rank of lieutenant commander by the time of his retirement in 1934.

One other search result led to a Facebook page and a surprising discovery. The family of Alice Whitfield Hand has donated her letters to the University of the South in Sewanee TN. They posted a scan of a letter that she had received from Bayard’s brother-in-law the Rev. Charles Todd Quintard, (later the first vice-chancellor of this same college). This letter from November 1858 is a warm “welcome to the family” to Alice and a humorous attempt to press her for news about the “scamp” naval lieutenant Bayard E Hand.

[Aside – I have ordered scans of some of her letters to hopefully answer some other questions I have, like did they meet at her father’s inn when he traveled between Rome GA and either Norfolk VA or Annapolis MD. Or was it at Beaufort at a later time. I will follow up with a post at a later date with what I learn.]