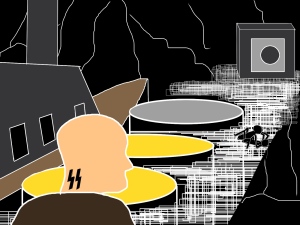 VIEW FROM ABOVE THE IRONCLAD
The ship nestles down into a web of catwalks at the center of the silos.

CATWALK
One by one they spill out of a gunport onto the catwalk, Mrs. Slidell first. One of the silos overflows with gold dust, which catches Mrs. Slidell’s eye. Rance, though, doesn’t seem interested in any of it. He stands staring intently at the entrance far above them.

RANCE
I don’t know, and I hate that feeling.

In the b.g., Mrs. Slidell kicks off her shoes and steps off of the catwalk and over the rim of the silo onto the “golden sands.” Morgan turns from Rance in time to see his mother beginning to climb the mound of gold dust.

His cry rivets all eyes in her direction. She stops to look back at her son, and plummets from sight.

The three conspirators rush towards the silo where she disappeared. Ben seizes the moment and Abigail’s arm.

He hurls her back into the ship and follows after her.

DECK OF THE IRONCLAD

BEN
She’s made a fatal mistake.

BEN
Almost certainly. Remember what happened to that boy fooling around on top of that grain elevator?

ABIGAIL
Straight to the bottom?

ON THE CATWALK
Morgan charges his brother and slams him to the catwalk grate. Horatio looks up, stunned.

HORATIO
What are you doing?

MORGAN
You let her go out there!

Rance watches their exchange in hypnotic fascination. Horatio rises and kicks his brother’s feet from beneath him, then dives on top of him and they thrash about on the catwalk. Rance looks beyond them and catches sight of a safe like structure beyond the last of the silos. He leaves the two battling brothers and moves off to investigate.

DECK OF THE IRONCLAD
Ben and Abigail leapfrog from gunport to gunport locking them down. Between each one Ben casts about looking for something in particular.

ABIGAIL
How are we going to get her back up?

BEN
I’m working on that.
(pause)
I’m wondering if Riley might be up there with reinforcements.

ABIGAIL
You’re thinking the soldiers closed the entrance as a defense?

He spots what he was looking for.

BEN (CONT’D)
You finish off securing the gunports. I think I found what I was looking for.

He pulls on a rope hanging from the ceiling and a collapsible ladder unfolds to the deck. No sooner does it touch down than he bounds up into the opening above.