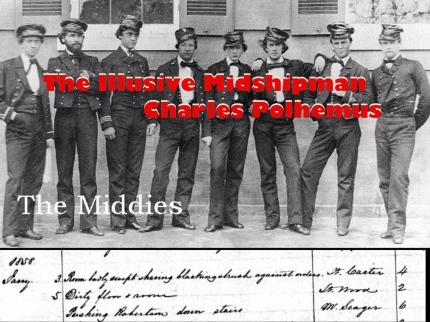 Probably the most difficult midshipman to get a bead on was Charles Polhemus. I first looked him up back in 2009, with nothing but the slimmest of clues. I had no indication, where he had been born or from what state he had been appointed.

I concentrated on the censuses for 1850 and 1860 and got a hit on a Charles G. Polhemus of NY. Though each census showed a different NY county, I knew him to be the same individual in both because the other family members’ given names were the same in each instance, with a corresponding increase in ages. And the ages listed for Charles was on track to be my midshipman, but there was nothing else that confirmed that he was the actual person for whom I was looking. I noted down the details from the two censuses, hoping to track down some links that could corroborate his identity.

Many people with the name Polhemus popped up for the state of New Jersey, and in particular Burlington County, but no one there matched my midshipman. So, Charles G of NY was looking more and more plausible. Besides I learned that “Polhemus” was of Dutch origin which again can fit nicely with the Knickerbocker state. Further research revealed that this Charles Polhemus served in the Civil War in a New York Regiment, the 13th Heavy Artillery – a fact that would not be unusual, as other midshipmen had switched from webfeet to landlubbers, especially those middies who had resigned from the Academy.

But it was all a false trail.

When I found the list of the candidates for examination for the Naval Academy, I filled in some important details for my illusive Charles Polhemus. He held an appointment from the 2nd Congressional District of New Jersey (which includes Burlington County) and  passed his examinations on 9/26/1857. The possibility that the Charles G from NY was my midshipman began to dim. (Not totally, as I had come across appointments that originated from one state even though the candidate lived in another – especially when the appointing Congressman was a relative).

And so things sat for several years.

With the inclusion recently of the naval hospital records on Ancestry.com, I was able to zero in on the right Charles Polhemus.  For three days in November 1857, Charles was admitted to the naval academy hospital for bronchitis.  As with all the Acting Midshipman admitted, their place of birth was recorded. C. Polhemus was born in Chile. This “rare” tidbit combined with the other data that has accumulated on the internet in the intervening years gave me the breakthrough I needed.

This Charles Polhemus was related to the New Jersey family that I had run across earlier. His father was John Hart Polhemus sr., who was a grandson (and namesake) of John Hart, a signer of the Declaration of Independence. John moved down to South America sometime in the late 1820s and entered into business.  In Lima Peru he met and married an English woman Marianna Dean on August 28, 1836. My Charles was born to the couple in Valparaiso, Chile on December 27, 1841. Some sources state that President Andrew Jackson had named John, the American consul in Valparaiso.

As you can guess, there was a very good reason then for the family of my midshipman not to show up in my earlier searches of the US census for 1850.  They were out of the country. The future midshipman returned to the US from Valparaiso on February 8, 1851 entering through Baltimore, with two of his brothers (their mother had died in Peru in 1849).

And there is another good reason why my midshipman is missing in the 1860 census.

Charles’ naval career was very brief. Having entered the Naval Academy in the fall of 1857, he resigned six months later – though  not through overindulgence in demerit worthy activity. His demerit total stood at 108 for that time period, half of what would have called for dismissal. (He did have a notable doozy, receiving 6 demerits for throwing a fellow midshipman down the stairs. And he evidently had a problem keeping his room clean, being cited a total of ten times for a dirty room – I have a suspicion he relied on servants at home for that chore). As the saying goes, he bilged (i.e. failed) in the February academic exams. The family genealogy shows that Charles died at sea on December 2, 1858, nine months after leaving the Academy.

I am in the dark about the circumstances behind his death. Had he gone to sea in the merchant marine? Was he out on a pleasure craft, or merely taking passage on a commercial carrier? Was he lost overboard or did he go down with his ship? I can only speculate.