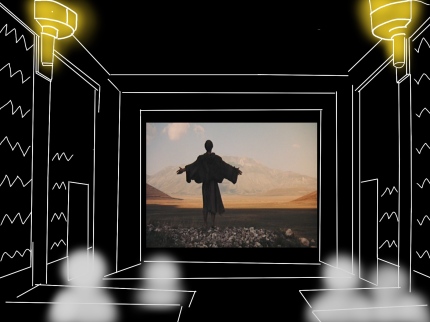 It shouldn’t be surprising that I used to dream about my work. Probably every one does. But these dreams were the weirdest when it came to my job at Saffle’s Theater Service over on John Street in Seattle. In some respects they were like walking through an Ingmar Bergman movie.

In this particular recurring dream, the streets were empty, and I was wandering them alone. I moved in the silence, not a single person anywhere, and no vehicles either, just buildings and trees and other such landmarks. I would follow the familiar boulevard towards my workplace. But I stopped a block short, and took another street on a vector away from my goal. And then another turn brought me up a hill and over to Second Avenue. I felt awake and conscious – all was recognizable to me because it was the landscape across which I circulated for my job. And there was a deadline somehow involved in the logic of the dream, yet not binding, as time itself was slowed down.

My movements always came to an end over on a little section of Second Avenue between Bell and Wall Streets.  There all the film distributor offices were huddled together in one little section that was called “Film Row.” And there also was the focus of the “fun” part of the job, the screening rooms.

There were two main venues on film row, where the screenings for new films were scheduled. Fox was the only distributor to have their own in-house screening room. I have absolutely no recollection of this screening room (my boss must have covered the few offerings there). I have been told that it was tiny and uncomfortable, and every seat had a bad view of the screen.

The other venue was a different story. The Jewel Box was a gem. (The choice of name was a genuflection to that old favorite choice for a theater name. If you’ve seen those old theaters with the name Bijou above the marquee, you’re were looking at something akin to the same thing – ‘bijou’ is French for jewel). It was built in 1927 by B. F. Shearer as a showcase for his theater equipment company.

With only sixty seats one might say it was the size of a shoe box, (compared to the theaters of that day – not now), but it was comfortable. One center aisle divided two seating areas. At the front there were individual theater seats, but as you moved to the back there were a series of booths – bench seats with their own long tables upon which you could place your meals, ordered up from the Rendezvous restaurant next door (a side door of the theater led straight into it). One might call the arrangement with the booths an early example of stadium seating, for each pair of them had their own riser.

The summer of 1976, I spent a lot of time at the Jewel Box viewing films. Here are a few titles:

In May- Food of the Gods (AIP) Marjoe Gortner

[These movie “dreams” may have impacted somehow my “dreamlife.”]

One night we had the Jewel Box all to ourselves or rather all to our families, mine and my wife’s. And some few choice friends. I had arranged to rent it for my wife’s birthday party. (We all had dinner at the Spaghetti Factory before coming to the Jewel Box).

But what would renting a theater be without a movie? So I arranged for that too. I contacted Joe Vigil, my Paramount rep (and friend) down in San Francisco and ordered up a film title by one of my wife’s favorite directors, Franco Zefferelli. You may be familiar with his Shakespeare films “The Taming of the Shrew” and “Romeo and Juliet.” Along with our snacks and cake we sat down to watch “Brother Sun Sister Moon.” The film tells the story of the life of St Francis of Assisi.

I believe for a time this director’s films may have eclipsed Gone with the Wind as her favorite.