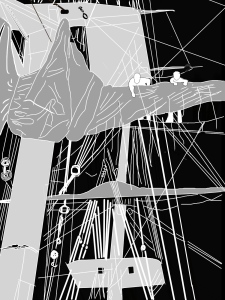 ON THE USS CONSTITUTION – THE MAIN TRUCK
Fifty feet up on the main mast, Lon drapes his chest over the furled mainsail while walking the footrope that sways beneath it. Beside him his fellow midshipman JIMMY TRUEBLOOD mirrors his movements. In contrast to Lon, Jimmy is fair-haired and a little on the skinny side.

LON
Yeah, things are just bigger than we’re used to.
(becomes serious, lowering
his voice)
So, are you resigning?

JIMMY
No. No reason to. My state ain’t got no slaves.

LON
Yeah. I guess California will stay put. Sometimes I think the rest of the country has gone crazy though.

JIMMY
Mississippi has gone out, are you resigning?

LON
No. I don’t want to. I’ve got four years invested here. Way I figure it what else am I fit for?

Jimmy looks about, then edges closer with a conspiratorial air.

JIMMY
If I couldn’t be in the Navy, I think I’d be a pirate.

LON
A pirate! You’re crazy. What could you steal these days?

JIMMY
(with a wink)
Haven’t you heard of the California gold ship?

Lon looks up with interest.

JIMMY (CON’T)
Once a year the San Francisco mint fills up a ship with the fruits of the California goldfields for transport across Panama to New York.

Lon’s gaze drops to the busy deck below. Little knots of plebes are scattered about performing various duties.
Acting midshipman LOUIS TOUSSAINT, a stocky young Creole with a massive tangle of jet black curls stops below them, sketch book in hand.

Jimmy hunkers down, trying to lower his profile.
No good. Louis looks up and catches sight of him. He shakes his fist, tosses his sketch-book to the deck and bolts for the ratlines. Jimmy moves as quickly off the yard as they can, warily eying the approach of his nemesis, and Lon follows.
They reach the cross-trees just as Louis does. Being first off the yard, Jimmy grabs a back-stay, leaps off into space and zips down the line to the deck below.
Lon coolly stays where he is, while Louis screams after Jimmy.

LOUIS
I’ll get you!

LON
(bars the way with his arm)
You’re making a mistake.

LOUIS
No! He did! I’m calling him out.

LON
Just what did he do to you?

Louis turns his furious face to him, plucking his knife from the small of his back.

LOUIS
Out of my way, I’m getting even…

LON
And I’m calling it even.
(pointing to his jaw)
For this.

With a finger, Lon traces a scar along his jawline.

LOUIS
That was an accident.

LON
And I’ll remind you that you said you’d make it up to me.

A sly smile splits the Creole’s face. There is a HALE from the deck. Louis returns his knife to its sheath.

LON
Well, if you think so, I want another favor.

Louis bows his assent.
Lon returns the bow, then follows Jimmy’s route and zips down to the deck. Louis steps to where he had been and looks after him. He hesitates a minute, then returns via the ratlines.

ON THE USS CONSTITUTION – FORWARD DECK – LATER
The trio of Lon, Louis and Jimmy are mounted on the bulwark, sketching the arrangement of the chains. Just down from them a crew of plebes work the sling on the makeshift crane, bringing kegs of gunpowder on board.

JIMMY
(pointing to the kegs)
What do you suppose is the meaning of that?

LON
I heard it was just for practice.

LOUIS
Humpf! I think they mean to arm the ship and us.

JIMMY
(laughing)
You mean “Repel boarders” and “pass the ammunition?”

LOUIS
Go ahead and laugh. I hear two of  the forts down in my state were seized.

LOUIS
If not now, for sure later. Maybe even here.

JIMMY
Are you going to resign?

LOUIS
Not yet. But as soon as my state goes…

JONAH, a burly petty officer steps up to Lon and puts his
knuckle to his forehead.

JONAH
By your leave, sir. The Lieutenant wishes to see you on the quarterdeck.