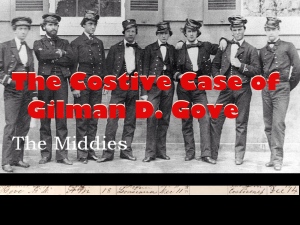 I was entering data on Acting Midshipman Gilman D. Gove for his stay at the US Naval Academy hospital from December eleventh through fourteenth in 1855, and there it was, another term that I needed to look up. Though I had a sense what it might mean from a root word with which I was familiar, I was puzzled as to what medical connotation it might carry. The word was “costiveness.” Its root word “costive” had conveyed a sense to me that something was being held back, as in that someone who was costive, was not speaking, was holding back his opinion.

I was surprised to learn that its first meaning was the medical condition – constipation, and the secondary meanings were what I thought were its first. (And it also shed some new light on my original understanding). The word constipation had been used in every case up to this one, and why the records keeper for the case of Midshipman Gove chose to use the word “costiveness” remains a mystery to me. Perhaps it was a different record keeper than whoever kept the former entries and it was his vocabulary of choice.

There are some unsettled facts about Gilman. I found a birth record from the state of New Hampshire that states he was born on May 12, 1837 in Kensington (the town in which his grandparents lived and from which there are many Goves). Yet the naval academy records, the 1870 and 1880 Federal censuses, and the government hospitals in which he was a patient, all list Louisiana as his birth state. Indeed, they were transplants to that area from New England. His father, Asa Dearborn Gove had moved the family from his wife’s home in Boston, Massachusetts to New Orleans, Louisiana in 1832. In Boston he had been in the fruit business with his brother Amos. He continued in that line in their new home, trading in fruit around the Caribbean. So, though Louisiana would seem the most likely birthplace for him, Kensington can not be ruled out.

Some time in the 1850s his father moved the family and business to New York, and it is from that state that Gilman was appointed to the Naval Academy in 1852. Gilman graduated from the academy in 1856 and served only two years before resigning in 1858.  I do not know the reason for his resignation. His father passed away in 1860, so he might have resigned to help an ailing parent. Asa had sold the business in New York and bought a farm in Windsor, Illinois. Gilman’s name does appear on the 1860 probate papers as administrator.

With the coming of the Civil War, Gilman entered the navy once again. He traveled to the nearby town of Neoga, Illinois in March 1862 and enlisted in the volunteer navy. He served as an Acting Ensign in the Mississippi Squadron, on at least two gunboats, the USS Black-Hawk and the USS Benton. He was serving on the later when he again resigned in February 1863. Again I do not know the reason for the resignation.

He most likely returned to Illinois. The IRS records for 1865 list him with his brother Howard in Charleston, Illinois, which put them close to their mother in Windsor. The 1870 census places their mother in Kansas City, Missouri, living with her daughter’s family.  The boys are also listed in this residence and working as clerks for their brother-in-law. Their sister’s husband, William Beecher Stone owned an agricultural warehouse which dealt in farm implements. The next census (1880) indicates that Gilman and Howard followed  Mr. Stone to Galena, Kansas. A huge lead strike was discovered in Galena in 1877, setting off a rush, and Stone got in on the ground floor. Gilman is listed as a clerk in the district court, and living with Howard’s family. Howard was working in Stone’s lead mining company, and within a few years Gilman was also.

In December 1891, Gilman was diagnosed with nervous prostration, and admitted to the Government hospital in Leavenworth Kansas on 5/5/1892. He was discharged after a four year stay, but only to be transferred to the Government Insane Asylum in D. C., where he died two months later; the cause – general paralysis and insane with dementia. Was lead responsible? Another unanswered question.

So, this is my summation of the life of Gilman D. Gove, full of facts and connections but with some dangling questions, big and small. Nowhere in all these records did I find his middle name recorded. Two family names are possible candidates: Dearborn (his father’s middle name) or Donnell (his mother’s middle name).

As they say, “The answer is out there.” Somewhere in the costive universe there are answers to all these little questions about Gilman D. Gove.