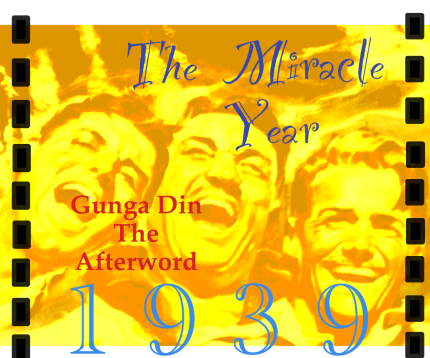 The weekly studio roundup sections in Variety during the month of November mention only that Gunga Din was in the cutting room or awaiting a preview.

Once filming had wrapped on Gunga Din and the footage turned over for editing at the studio, another department stepped up their work to keep the title before the public and to remind their select target audience – theater owners –  that the film would soon be available to book in their theaters.

This work of the publicity department in an offhand way gives us another interesting look at the ways and means and challenges of the production process.

In Cal York’s Hollywood Gossip column in the November edition of Photoplay, a section focused on weight loss among the stars. His main subject was Claudette Colbert who had dropped an half inch after ten days of doing the cancan for ‘Zaza’ – a George Cukor film. He caps off this tidbit with a discussion about weight loss among the principal actors of Gunga Din. He reports that due to the heat of their location shoot, coupled with the heavy woolen army uniforms they wore, Cary Grant melted twelve pounds off his frame in the first two weeks. A reminder that the actor, as artist, sometimes sacrifices for his art.

In another article about the heavy use of ammunition in film production throughout the year of 1938, Gunga Din came in for another mention. The firm of J. S. Stembridge was kept busy around the clock supplying the weapons and making up the special charges necessary for staging celluloid conflict. It goes on to cite these films:  ‘Hotel Imperial,’ ‘Union Pacific,’ ‘Juarez,’ ‘Oklahoma Kid,’ ‘Dodge City,’ ‘Stagecoach,’ and ‘Heritage of the Desert.’ many of whom will be upcoming in this series, 1939 – The Miracle Year. For Gunga Din, Stembridge’s firm supplied 500 rifles and I know from another source they supplied the two gatling guns, at one time glimpsed being carted by two of the elephants.  Was Anna May one of the pistol packing pachyderms?

Other mentions were offered about who would score the film. Before production began Roy Webb was listed for the chore and though alluded to briefly after filming closed, his name disappeared from the running (he was very busy as music director at RKO – 28 projects credited and uncredited in 1938; 22 in 1939).  Instead another name, Erich Wolfgang Korngold, was bandied about. But happily, and no doubt to Webb’s overworked relief, it fell into the talented lap of Alfred Newman, fresh from the Goldwyn studio as a freelancer.  And his joyful, jaunty score perfectly matches and enhances Stevens’ film.

An interesting article in the March edition of the Motion Picture Herald, two months after its opening, talked up a specially edited together 10 minute version of Gunga Din. It was offered to the infant TV industry to be broadcast in New York for 1939 World’s Fair – taking place there in April.

I close out with a valuation from the standpoint of the business – from how it would be judged in light of the studio’s bottom line. It cost 1.9 million to make and generated a gross of 3 million in its first year in the US. And before you conclude that it made a killing at the box office let me remind you that a gross is not equal to what RKO received back in film rental. I do not know what it exactly brought in to RKO, but I can offer an educated guess. At best the theaters would only have paid 50% to the distributor, or at worst 35 or 25%. So you can see that even at best, it fell $400,000 short of recouping its cost that first year. (Sources state that it did indeed finally make its cost back, but only with future re-releases).

A clue to its falloff in performance may be indicated from reports in Box Office magazine that a lot of theater owners in the Midwest were not keen on booking it.

In so far as film is concerned Gunga Din has left a rich legacy. Echoes of its individual parts resound in many that followed.

Take the buddy picture for instance.

Our heroes with whom we are taught to identify, though allied in their camaraderie can often be at odds with one another, at times to our delight, especially when their relationships take a comic turn. In this regard I think of the series Ocean’s 11, 12, 13, and yes – 8. And I think back a few decades to Butch Cassidy and the Sundance Kid, whose writer, the famous William Goldman, was deeply enamored of Gunga Din.

And then there is the adventure film. One need only mention the Indiana Jones series as the prime example overall and its Temple of Doom chapter in particular.

That said, Gunga Din on the whole stands as something greater than the sum of its parts. And I heartily recommend it to your enjoyment.

(You can thank me for the minimum of spoilers).