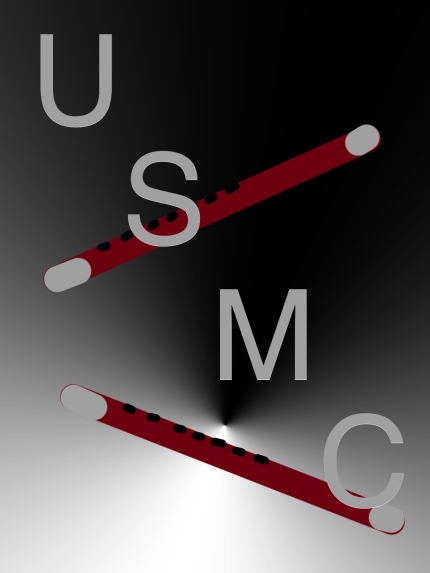 I recently had the fun of running down information about a US Marine who had been assigned to the USNA in 1860. Or to be more precise, a marine who had been attached to the USS Plymouth, the naval academy’s school ship for their cruise the summer of that pivotal year. It was a convoluted task, that commenced with only the slimmest of leads.

My jumping off point was the US census for Annapolis for that year. I was scrolling down through the names of the superintendent, the professors and officers, and the midshipmen – and sandwiched between those midshipmen and some US sailors was a short list of seventeen names. All listed as ‘US Marines.’ And all with places of birth listed as ‘Unknown.’ I used their names as the springboard for my online searches.

So, I went through four names –

I was using Ancestry.com which has an excellent database of scanned military documents.  My meagre ‘L Reinburg’ search returned a couple pages worth of US Marine muster rolls.

(I like the US Marine muster rolls. With them I have been able to trace the entire service career, month by month, of one of the midshipmen I have been researching – he had switched from the Navy to that branch).

Four of these records outlined Reinburg’s presence on the USS Plymouth, June through September of 1860. And gave me his first name – Louis. I input this new information and the year 1826 (calculated from his age in the census), a mistake as it later turned out.

Two different ‘Louis Reinburgs’ popped up. One born in Saxony, Germany seemed to be the one for whom I was looking. But he was a good deal older, having been born around 1819. The other had been born in Philadelphia, but twenty years younger than he should have been if the 1860 census was correct. It was obvious that they were father and son with the same names. But which was my marine?

I was leaning towards the older Louis until I found naval lists with this native of Saxony listed as a landsman, a naval rank. Since there were marine records for the second Louis in the same years as this navy man, I switched my hunch to the younger Louis.

But how was I to resolve the “age” issue?

A Google search did point to a Louis C. Reinburg who died in 1903, and had a career in the marines. But he had switched to the navy sometime in 1864. This was starting to get more confusing.

The Marine muster rolls proved to hold the key.

I compared all four muster rolls for the USS Plymouth. The names were the same on each one. I then compared them to the names in the census. They were all the same. Or almost all the same. (The census taker as you will see had some issues).

The first five for the USS Plymouth:

John Bauman – Orderly Sergeant, enlisted March 30, 1857 (not Rossman, whoever wrote out the name did not close the bottom of the “B,” wrote an “a” that looked like an “o” and the peaks of his “u’ looked like a double “s.”)

The rest of the names on the muster lists are all privates, and match, in order, and almost exactly (save one), the names on the census. Tracing Reinburg back to his enlistment I found him on a muster roll for August 1856 at the Marine Barracks in Washington DC.  But his rank was delineated as “Boy.” (His comrade Robert Hamilton is on the same roll with the same rank).

I had to look up this rank to see what light it might shed on my marine. And I came up with this quote:

“’Boys,’ the lowest rung on the rating and pay scales and one
traditionally reserved for young men under the age of eighteen.”

This Louis Reinburg was born in 1846, so he was the ripe old age of ten when he enlisted in the marines. Following forward he became a fifer in 1857, and was serving as such on the Plymouth. His fellow marine, Robert Hamilton, was a drummer.

The two had served together in the same capacities on a cruise in the USS Jamestown between 1858 and 1860, just before their time on the Plymouth. So no doubt they were a team.

Reinburg took his honorable discharge from the marines in 1864, and then enlisted in the Navy as an Acting Master in the Volunteer Navy. He served the rest of the war and beyond, taking his honorable discharge from that service in 1868 at the age of 22, having given twelve years of his life in service to his country. A service that he continued as a clerk in the Pension Office of the United States.