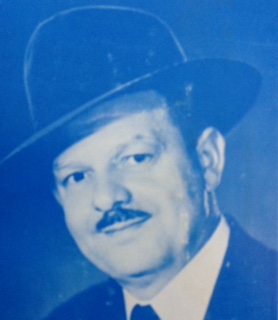 Union agreements required that the Fifth Avenue Theater employ a stagehand. I was not aware of this fact,  when I met Walter Theron Coy my first week on the job. I was behind the concession stand concentrating on something else completely when I looked up to see an elderly man emerge from out of the auditorium. It caught me off guard. He was rather shabbily dressed, giving him an unkept appearance. He put me at ease by explaining who he was and what he did around the theater.

His cherubic Irish face, resonant voice, infectious laugh and an enormous mass of keys jangling on his hip made for a memorable introduction. Gaelic charm oozed out of him as well as a stream of patter that he later confessed to be straight out of the days of vaudeville. (At the age of 13 or 14 [1921 or 1922] he had been a candy butcher who operated evenings among a group of three Seattle vaudeville theaters. Incoming acts came to rely on him for intelligence on what routines had been employed by the outgoing performers, so they could adjust theirs accordingly). And prior to high school he even performed on stage, singing popular songs of the day accompanied by the theater organist.

[Aside – In his autobio, Walt states that he learned a lot about show business from the consumate pipe organist Oliver Wallace at the Liberty Theater down on First and Pike. Wallace later went on to work for Walt Disney, writing music for shorts and then features, from “Snow White and the Seven Dwarfs” up through “Lady and the Tramp”].

The more I talked with him over the weeks that followed, the more his life experiences surprised and impressed me. By the time he was in high school, he was playing drums or banjo in speakeasys around town. His love of the banjo led him to share stories about the Banjo King, Eddie Peabody, (aka the Banjo Maniac and the Rajah of Rhythm) who had headlined many of the vaudeville acts at this same Fifth Avenue Theater, from 1927 through the early 30s.

But what really raised my eyebrows was his tales about working as an extra and a cameraman in Hollywood. He had gone down to LA when he turned 20 to try to break into “pictures.” He was an extra at the Chaplin studio on one of Charlie’s films. His description of the action made me think that it was his WW1 comedy “Shoulder Arms,” but upon reading his autobio almost a decade later it proved to be something else altogether (stay tuned for my Research post this Monday).  He then lined up for extra work over at the FBO Studios (owned by Joseph P. Kennedy) for director Erich von Stroheim, who was hard at work on the infamous “Queen Kelly,” starring Gloria Swanson.

Walt found getting work as an actor a tough go. So he switched to the technical side of the business. He had always been adept mechanically, having built his own radios when a youth. He joined the Naval Reserve in Seattle to learn more about radios and sound equipment. (And to fly, for he liked planes). He made a trip down to LA and called on Gordon Sawyer, the head of the sound department at the Samuel Goldwyn Studios to learn all about sound reproduction on film. He used this knowledge to build and sell bootleg sound systems to small theaters throughout the Northwest. (The systems by Western Electric were all by lease only, and unaffordable given the small amount of business these towns generated).

Sometime in the 1930s, Walt joined Local 659, the Hollywood cameraman’s union. He served on the camera crew for Paramount’s production of “Mrs. Wiggs of the Cabbage Patch” with W. C. Fields and Zasu Pitts.

He wasn’t often down in Hollywood to my calculation, for he had many businesses in the Seattle area that he ran – a printing business in the early thirties, a film exhibition company (one theater to begin with) which he acquired in 1937, and the Seattle Motion Picture Studio, a commercial film enterprise that made sound films – advertising, novelties and gimmick offerings. During the Depression, he kept fingers in a lot of pies, for he said, you never knew what would keep you afloat.

At the time I met him (1974), his studio was closed, but he still had some of his gear. He had sound equipment, of course, but he also had a 16mm self-blimped Auricon camera, that did not need a sound recorder as it had the capacity to directly record onto the film stock. A custom built camera dolly which could be cranked up to a six foot crane rounded out his holdings.  And he allowed me and my cinema-struck friends to use them. We just needed to rent some lights. (We used the lobby of the Skinner building and the backstage area of the theater as settings).

I last heard from Walt in 1980, when he sent me a signed copy of his autobio “My Uncle Sam Don’t Like Me.” In telling his life story, he details his trials and tribulations with a vindictive IRS which twice sent him to prison. When people styled him as an ex-con, he disagreed, and said he was just a convicted tax evader, whose case was under appeal. The appeal he won, and the judgement was reversed.

Walter Theron Coy was a true one of a kind.

[Aside – Walt preferred to write his name as Walt T. Coy, but I spelled it out completely so as not to confuse him with an actor that came out of Seattle around the same time. That actor was Walter Darwin Coy. He was on stage and screen, and notably, played the brother of the John Wayne character in “The Searchers.”]

4 responses to “The Stagehand of the Fifth Avenue”