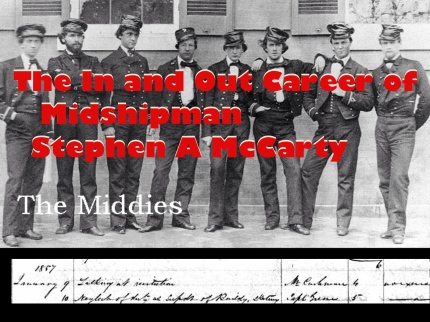 When I started to research the midshipmen of the  ante bellum US Naval Academy, all I had was a list of names from the official register. I input each name into a database and commenced to look them up. I recorded any datum that I came across from a variety of sources. Slowly, bit by bit, I was able to build up a “sketch” for each name.

When it came to Stephen Austin McCarty, the first results were very sketchy. I confirmed that he was born in New York and appointed from the same; that he graduated in May of 1861 (with the war underway, the top three classes went straight into service, Stephen was in 2d); that he was at the battle of Mobile Bay; that he retired Nov 1 1874 and that he died in DC on Dec 23, 1883.

I was hoping to fill in a few more details when I found the academic records for all the midshipmen for November 1860. When I came to McCarty, however, there were no grades, which was strange given the fact that he graduated the following year. So, I simply left a note in that field that read (Why no grades?), and continued on.

I found another list that gave me the date of their entry examinations (academic and physical) and the order that they appeared for those ordeals. I counted back from the 1860-61 school year to those entering the plebe class of 1857-58, but there was no McCarty. Other members of the second class that entered at this time were covered. (Actually my list of names grew, because all those who had failed the exams were also listed, and I added them to the database). So, I checked the prior year (1856-57), which showed him entering the academy on September 25th 1856, indicating that he was held back and repeated his plebe year.

More of the picture came into focus when I located him in the 1850 federal census. It shows him living with his parents in Oswego County NY. [Aside – the region they inhabited was affected weather-wise by its proximity to the Great Lakes, especially in winter, with heavy snowfalls (and still is). He must have loved winter sports, so much so that he ran afoul of the regulations to pursue them, pulling down demerits for “Neglect of duty – skating” and “Breaking a glass in No 61 with a snowball”]. His father was Andrew Zimmerman McCarty, a lawyer and politician (his mother, born Elizabeth Austin, explains the choice of his middle name). In fact, at the time of Stephen’s appointment to the Naval Academy, his father was the New York congressman from the 22nd District, and hence the one who had appointed him.

The big breaks came when I read through the letters of the Superintendent of the Naval Academy. Here I discovered that McCarty was dismissed from the Naval Academy on 4/27/1859. He was one of six so condemned for their involvement in the “Foot Outrage” that transpired in early April. However, Stephen was back in again a month later when he was reinstated on 5/20/1859. It is possible that his father, though no longer a congressman, exerted some influence to get him back in.  The other five were similarly brought back at the same time and put under confining restrictions, all being sent to sea for the summer cruise in the USS Plymouth.

Stephen was only returned a short time when he was on the outs again, this time resigning on Oct 17, 1859. Though I do not know why he resigned, it does explain why McCarty had no grades in November of 1860; he’d been gone a year by that time (the 1860 census showed him back home with his parents in New York, with no occupation noted). So how did he get back into the navy in September of 1861?

And the answer to that looks to be in a round about way – through the army. Stephen’s name pops up on the rolls for company K of the “Irish Rifles,” the 37th Regiment New York Infantry. He enlisted at nearby Pulaski, NY in May of 1861, taking a commission as a first lieutenant a month later. The regiment left the state for Washington DC at the end of June, and went into bivouac at the foot of East Capitol Street. While there it’s my theory that he took the opportunity to drop over to the Navy Department and there petitioned Gideon Welles to rejoin his classmates from the Academy, who were no longer at school, but serving on active duty in the navy.  I located a letter from the academy superintendent Captain George Blake to Navy Secretary Welles that stated he had no objection to McCarty rejoining the service. Blake only recommended that his placement be at the bottom of the class, rather than at the position he held at the time of his resignation.

A similar type sentiment may have acted against McCarty later in his career. He served faithfully and gallantly throughout the Civil War, rising to the rank of lieutenant commander. However, in 1872 when attached to the USS Powhatan, he succumbed to the influence of alcohol and was court martialled. Given a second chance, he slipped again, and resigned rather than be dismissed from the navy. When he petitioned Congress six years later to be reappointed, he explained that he had resigned so that he could reform away from the temptations surrounding life in the navy. Though the Senate Naval Committee voted to promote his request, it failed. One of the telling arguments was the complaint that it would put him ahead of many who came up behind him in the intervening years.