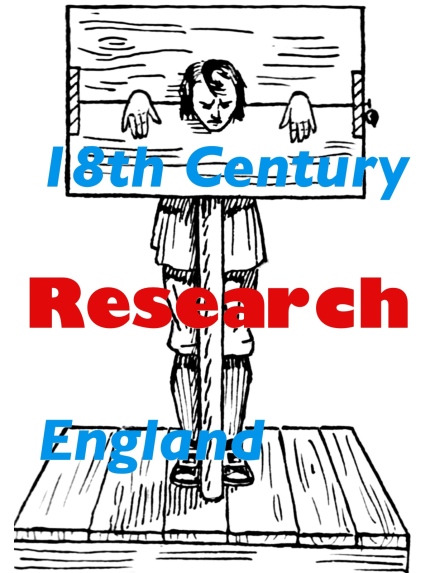 You know you’ve seen one.

I’d seen one or more too. I was somewhat familiar with the practice and the hardware involved, having grown up in New England (Salem, Mass., to be precise). And then cartoons and films to which I’d been exposed, enlightened me with their insights. But I wanted to gain a better understanding, to better tackle a scene built around a character undergoing this punishment in my first screenplay.

The pillory as a form of punishment was not new to 18th Century England. In fact, by that time, it had been in use for over five hundred years.

So what was the pillory? It consisted of a pole atop of which was fixed a pair of boards, from which cut outs had been made to create holes for the head and hands of the convicted party. These boards would be secured together, holding him or her in place. Most were constructed on top of a platform in a very public area, such as the market place in a church parish. Notable ones in London were at Charing Cross and Seven Dials. [I chose the Seven Dials area as the site for my scene.]

The objective behind the pillory was two-fold: to chastise and to warn. The English system of law at that time was called by many the “Bloody Code.” And death was the penalty for breaking most of its statutes, so one could say that a sentence to the pillory was merciful by comparison.

Set times would be announced when the miscreants were scheduled to stand in the pillory before the community they had wronged. As they were chastised in this manner, the public was notified (warned) about what the person had been up to, con-men, gambling cheats, brothel keepers, blackmailers, sexual deviants, dishonest tradesmen. For instance in the last example, a baker may have skimped on the size of his loaf or a butcher added his thumb to the scales when selling his wares.

The time in the pillory would be limited to one hour in one day, and sometimes the sentence would call for multiple appearances over a range of days at that hour. For that hour they were at the mercy of the crowd. And this is where it could turn deadly. It would all depend upon the severity of their transgression in the judgement of the crowd. Unable to defend themselves the person standing in the pillory would be pelted with eggs, vegetables, any manner of dead animals, and/or with examples of the culprit’s shoddy products. If their crime was adjudged heinous in their eyes, more deadly projectiles would fly.

The authorities kept to their responsibility of carrying out the sentence. They were not invested in protecting the individuals, after all the criminals were there for punishment. But the individuals themselves could have or hire others to protect them, and run interference.

And this aspect of the pillory became a central element in the scene I wrote, as I put my protagonist in the role of protector for another character whose crime has landed her in the pillory.