I love research. So I am jazzed that my writing gives me many opportunities to do so. Usually I do all my research upfront before starting a script. For instance, I had to rule out using the Golden Gate Bridge as a location for it did not exist in 1928. It was being debated then, but construction didn’t even start until five years later.

But sometimes in the midst of writing I get stopped cold until I can answer a pertinent question.

That happened just recently (on this same project). I was typing along creating the dialogue for one of the characters. He was picking up the phone to make a call – and he has to speak the number he wants to the operator. Phone numbers in those days required an exchange that you would state upfront. So I needed one that would pass muster.

I opened my browser and went over to the Internet Archive, and there did a search in their text holdings, using the terms “1928” and “San Francisco.” Among the returns to this query was a city directory for San Francisco which was perfect for my need. I flipped through several pages and noted down several exchange names (Sutter, Kearney, Mission, Market, etc.), from which to choose later and just in case I need more than one.

And I ran across this one listing that seemed to shout, “Pick me! Pick me!” 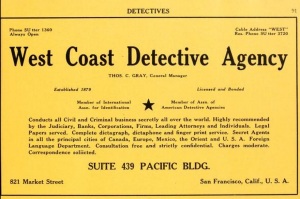