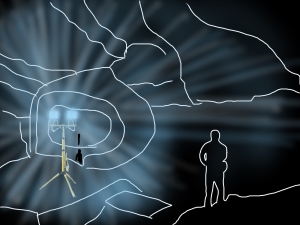 INT THE UNLOADING AREA – PRESENT
The bluish white glare of halogen lamps on stands sets the whole area awash in a sea of light, all attention focused on the chute. Rance kneels beside it, peering down its throat with the aid of a flashlight. A SQUAD OF SOLDIERS in climbing gear stand at attention behind him.

Hard by its side, a tent has been pitched, with an honor guard of TWO NEO-NAZI SKINHEADS flanking the entrance.

Suddenly, Horatio emerges from the tent, bulling through the tent flap, not bothering to hold it for his brother. Morgan brushes the flap aside, struggling to hide his aggravation.

HORATIO
Do we have another volunteer?

Rance glances up and points to the FIRST SOLDIER in line. The others breathe a sigh of relief as their comrade obediently steps forward.

Morgan drags the cable from the SUV’s winch over to him and with Rance’s help secures the end to the soldier’s harness.

RANCE
(peering back down the chute)
Just look at all that gold!

The first soldier drops to all fours and crawls head first into the chute. The cable remains taut as it pays out slowly.

FIRST SOLDIER
I can see a catwalk at the bottom. And I count – four, five, six more silos–

His report is cut short by a blood curdling SCREAM, and the cable falls slack.

MORGAN
Bring him back up!

The cable reverses and comes whipping back up out of the chute. All that is attached is the harness, the front of which is cut to ribbons.

MORGAN (CONT’D)
That’s it. No more. I am not going to lose any more men down that trap.

HORATIO
(reluctantly)
OK. Seal it up, we’ll find another way in.

MORGAN
Are you sure there is one?

A warning HONK precedes the RUMBLE of a Hummer in low gear, emerging out of the darkness of the tunnel leading into the loading area. It parks by the SUV and two uniformed PARK RANGERS hop out and drag two women out of the back seats, Abigail and Mrs. Slidell, both bound and blind-folded.

PARK RANGER ONE
(to Horatio)
We found these two poking around on the lower level.

MRS. SLIDELL
How about taking these blinders off?

PARK RANGER TWO
The young one had some interesting documents. The older is just plain trouble.

He hands Horatio a packet.

Morgan disengages her arm from his mother’s.

MORGAN
Shut up and sit down!
(to the rangers)
You two can return to patrol.

Horatio removes his mother’s blindfold and ushers her into the tent.

INSIDE THE TENT
Horatio holds up the documents.

HORATIO
Is this the key in, Mother dear?

MRS. SLIDELL
(in a low reproving voice)
Better keep up the “old bag” routine.
(in a loud voice)
I’m not telling you a thing until you tell me who you are.

HORATIO
(loud)
I’m asking the questions. What are you doing here?
(low voice)
Does she know how to get in?

MRS. SLIDELL
(low and accusing)
She seemed to know where she was going before your men stopped us.

HORATIO
(low and contrite)
I see. And now our best bet is for you to stay in her good graces.

MRS. SLIDELL
(loud while nodding)
I’m not speaking to you!

HORATIO
(loud)
So, either it’s torture
(soft)
to blackmail the goods out of her,
(loud)
or–

MRS. SLIDELL
(loud)
Or what?
(soft)
Allow us to escape and I’m sure she can get us in.