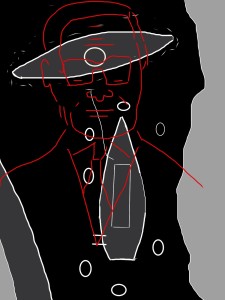 EXT DECK OF THE SALVAGE SHIP
With a French frigate stationed off her port, denying her access to the sea, the salvage ship sits in the center of a circle of rubber dinghies manned by FRENCH SPECIAL OPS.

Ben rides the lift up and over to the deck. Riley and Ceci reach out to guide him in.

RILEY
Sorry, Boss. There was nothing we could do.

A cadre of special ops have command of the wheelhouse. Ben looks around for Marguerite and finally sees her chained to the deck, looking disheveled.

CECI
(pointing to the CSS Gray Whale)
There’s your submarine, She rises.

Another team of French SAILORS swarm over the still dripping Confederate vessel.

CAPTAIN LECLERC
Property of the French government, from now and to perpetuity.

Over the side and onto the deck strolls Agent Sadusky.

SADUSKY
(to Ben)
You’re one hard guy to catch.

BEN
I see you had help. So, who gets us?

SADUSKY
Lucky me. I had my paperwork in first.

INT JET LINER – DAY
Ben and Riley, shackled and with two GUARDS apiece are escorted through the front hatch into the first class area. Two more GUARDS follow with their luggage. Their guards halt at the last two seats in first class and motion for them to sit down. Those with the luggage pile it in the seats across the aisle. Ben sneaks a peek through the curtain at economy class.

Sadusky stops at the hatch, signals to the pilots, enters and secures the hatch himself. All smiles, he takes a seat, and the plane starts to move.

BEN
(jerks his head at the coach area)
No witnesses?

SADUSKY
Maybe, no “watchers” is the better word. This has all been for their benefit.
(to the guards)
Go ahead take off their restraints.

The guards move quickly to comply.

BEN
Where you taking us?

BEN
No. Have you been reading mine?

Sadusky nods to one of the guards, who hands Riley’s laptop to Ben.

Ben logs in and a message is waiting for him from Abby:

ABIGAIL (V.O.)
Dearest – just a quick note – here’s the rest of the decryption. Lon talks about a cave in New Mexico and a gigantic vault. I’ve run into someone who is familiar with the area and has volunteered to take me there. Her name is Mrs. Slidell–

Ben grimaces and reads on.

ABIGAIL (V.O.) (CONT’D)
So, give Riley my love. You know you have mine already, but I send it again anyway. See you soon.

BEN
This was two days ago.

SADUSKY
No further news – we lost her.

BEN
You were following her?

SADUSKY
No. An asset from another agency down there spotted her and phoned it in. When he learned of our interest, he kept a eye out. They whisked her away right from under his nose.

BEN
Any leads at all?