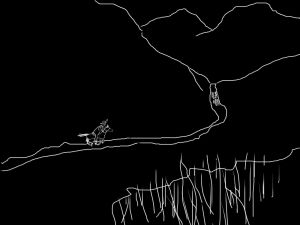 EXT A DUSTY ROAD IN TENNESSEE – DAY
Title: Near Memphis, August 1864
Two heavily laden wagons plod down the road. Romeo holds the reins of the first, with Lon riding beside him. Jimmy follows in the second with the Petty Officer driving the team.

Then, from around the bend ahead comes a racing rider. Soon, it is clear that it is Louis, who can barely keep the saddle under himself.

LON
(to Romeo)
No mistaking a sailor on horseback.

ROMEO
I just don’t think he likes heights of any kind.

Louis reins up to them.

LOUIS
There are horsemen up ahead.

LON
Ours or theirs?

LOUIS
No telling, they aren’t in uniform.

LON
You keep back with Jimmy and the “freight.” We’ll let them poke around this wagon, but if they try it with yours, you know what to do.

Louis spurs away as a body of horsemen emerges from around the bend. The one in front breaks away from the pack and charges them at a gallop.

ROMEO
Lordy. I know that face.

LON
I do believe I do too.

The obvious leader reins up in front of them. His followers soon catch up and fall into a semi circle to their front.

JESSE JAMES
Would I have the honor of addressing Captain Turner?

LON
That would be an honor, but as you can see I am only a Lieutenant.

JESSE JAMES
(laughs and hands him a letter)
Here. We were sent to find you.

Lon breaks the seal and extracts a paper.

ROMEO
(reading aloud over his shoulder)
Alonzo Turner is hereby commissioned a Captain in the Provisional Navy of the Confederate States of America.
(turns to shout to the others)
Lon’s a Captain!

JESSE JAMES
And my orders are to relieve you and your men of this detail and give you your new orders.

Jesse takes another envelope out. Lon peruses the directive.

LON
It’s alright, men. We turn our shipment over to these gentlemen.

JESSE JAMES
We’re right lucky to have caught you when we did. The territory up ahead is swarming with Yanks. As it is, we’re going to have to take your “freight” down into the mountains yonder.

Lon holds out his hand and Jesse James grips his wrist.

Three of James’ men dismount and trade their horses for seats on the wagons. Everyone in Lon’s party has a horse except Romeo.

LON
Do you have a mount to spare for my man?

James looks to his men, but they all look the other way, pretending they didn’t hear the question.

LON (CONT’D)
Well, lads, we’re going to run the blockade and go to France. We’ve a brand new ship waiting for us!