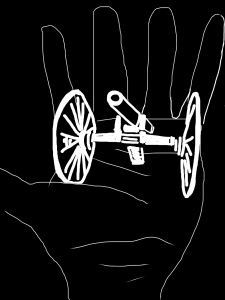 EXT. STREETS OF D. C.
Traffic thickens around Morgan’s SUV. Even so, a black pickup has no problem keeping it in sight. When Morgan weaves, they weave; when he turns, they turn.

They pull into a government building parking lot, and the black pickup glides to a stop at a curb parking space.

INT. HQ OF THE NATIONAL PARK SERVICE – HORATIO’S OFFICE – DAY
HORATIO SLIDELL, looks like someone more at home under the open sky rather than inhabiting the corner office with a view on the Mall of the capital. He peers through a large magnifying glass trained on a map spread open on the table before him. With the cry of “Aha,” he crosses to a standing file and lifts out an USGC map and positions it on top of the other.

His phone rings. He stares at it as if to will it into silence. Reluctantly he picks it up.

HORATIO
Slidell here.
(pause)
Hi, Ma.
(he continues to pour over the map)
No, he’s not here. But he called, he’s on the way.
(pause)
I know he promised and I promised.
(pause)
I’ll get someone right on it.
(he hangs up)
Love you too, Ma.

He marks an X on the USGC map, then crosses to a wall map and affixes a gold dot.

HORATIO (CONT’D)
Gotcha! He picks up a photo.

INSERT
A glaring light illuminates an ancient steam engine sitting on some tracks inside a huge cavern.

BACK TO SCENE
Horatio circles to his desk and the machine gun staccato of his keyboard fills the room. The door opens and the boys enter and instead of turning around Horatio calls over his shoulder:

HORATIO
About time you brought the coffee!

He spins around, sees his brother, et al., and is on his feet like a cat.

HORATIO (CONT’D)
Well, surprise, surprise, little brother! I thought you were another hour out.
(to the duo)
And you must be Ben and Riley.

Ben sidles over to the window and sits on the ledge. Riley finds a comfortable spot on the corner of the desk, and noticing a model cannon, commences to toy with it.

HORATIO
My brother filled me in on your ordeal. Horrifying.

Riley has the toy cannon now in both hands and is looking down the barrel, when Horatio reaches over and firmly takes it, and places it far away from Riley.

HORATIO (CONT’D)
I’ve made some discreet inquiries, but so far, nothing. It’s like it never happened. The logging company says their operations were closed down. There were no military helicopters in the area; nor any from other government agencies. So—

BEN
(looking out the window)
Excuse me. There’s a black pickup below that has been following us ever since the Smokys.

Morgan joins him at the window to look.

MORGAN
(looking back)
I recognize it too. Horatio steps to the phone.

Ben and Riley run out of the office. Horatio holds the phone and motions for Morgan to follow. When they are all gone, he hits a speed dial number.

HORATIO
Rance, you’ve been spotted. (A beat) Get back to the truck, and get the hell out of here.
(pause)
Don’t worry about that, Morgan’s keeping tabs. Report in, in an hour, I’ve got another job for you.