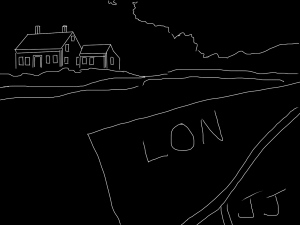 EXT. GRASSY SLOPE – SLIDELL RANCH
Ben turns the map in his hands to align the “Y” of the two creeks joining, to the scene before him. He looks behind him to the farmhouse far in the distance. Toby’s van sits in front.

BEN
(to himself)
Well, I suppose that explains the “Lon” reference. It’s his house. Now for the other two.

Riley and Toby appear in the distance and wave to him. Ben returns the wave and points to the “JJ” side of the slope. As he crosses to that side, the two head in his direction, with Toby eagerly in the advance.

LATER
Ben is stooping, combing through the tall grass when the boys catch up to him.

Ben stops what he’s doing and straightens up.

TOBY
Don’t worry. The door’s unlocked, so I’m sure they’ll be back soon.

BEN
Okay, we’ll just see what we can find in the meantime. But no digging.
(to Riley)
Why don’t you get the detector and check the other side.

RILEY
What am I looking for?

BEN
My guess is that you’ll find a buried knife.

RILEY
Ah. And see which direction it points and follow it up.

Riley departs at a jog for the van.

TOBY
And what are we looking for?

BEN
The mystery of “JJ.”

THE JJ SIDE OF THE GRASSY SLOPE

TOBY
Hot damn. This is exciting!

C. U. TOBY’S FOOT
Something shiny glitters in the grass.

BEN
(pointing)
Hold on! I think you found it!

Toby flips around to look. He parts the grass to reveal a metal disc flush with the ground. Ben drops down beside him.

C. U. OF THE DISC
A series of dots run around the circumference with a random letter assigned to each. Ben’s finger points to the first “J.”

BACK TO SCENE
Ben and Toby race off on the line of bearing, and stop where they can see it will intersect with the line that Riley is pursuing. Riley stops swinging the detector and makes a beeline for them. Toby is hopping up and down, barely able to contain his excitement.

TOBY
We got it now. I can taste it.

Riley motions them to step aside as he comes straight in on their position. The detector breaks out in a furious clicking.

RILEY
Whoa! Have we got something here!

Ben and Toby crowd in to view the screen.

TOBY
Ah! There’s nothing but a lot of junk.

C. U. OF THE SCREEN
Reveals various odds and ends – an axhead, bed springs, a straight stick of some sort and a large circle.

BEN
Oh, that’s not junk.
(pointing at the circle)
That’s a huge glass jar. Maybe one or two gallon.

TOBY
Just what we need two gallons of great-grandma’s preserves.

RILEY
What’s the matter with preserves? I like preserves.

BEN
Glass jars were the favorite backyard bank of the pioneers in this region.

Toby drops to his knees and starts to scoop up the earth with his hands, but stops.

TOBY
(rising)
I forgot. You’re right. We should get permission first.

Ben looks around at the still empty house and the setting sun.

TOBY
I know a nice, clean motel where you can spend the night. My house still isn’t put back together, I’m afraid.