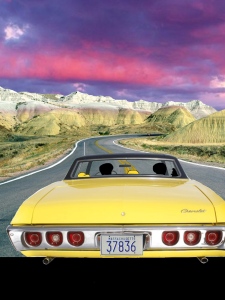 It was early in 1968. We were still running the Sound of Music in Cinema 2 and my father was called to the box office to help the cashier with a difficult customer. It seems that he did not like “his” seats for the Julie Andrews movie. My dad gladly refunded his money, all the while the complainer continued to whine. After the disgruntled customer departed, a VP from GCC came in. He had been watching the whole encounter from the outside. He came up to my dad and told him that he could soon say goodbye to such treatment, for on the West Coast the customers were all a lot nicer. The company was offering him a new theater that was going to open in Renton, Washington that fall.
We were on the move again. Though not until summer. Dad didn’t want us to miss any school. Time to say goodbye to all my friends in Brockton – Dave D, John M, Jimmy S, and Joe G. I recently discovered the oversized card that they sent me off with. The envelope was decorated with unusual grafitti – song ditties or doggerel either in Russian or Latin – stuff we had gleaned from the classes we had taken together.
My dad bought a new car for the trip, a four door canary yellow 1968 Chevy Impala. And he made sure it had air conditioning. So come July we were all set to see the USA in a Chevrolet. Or the northern part anyway.
We must have travelled fairly fast. I can remember the NY Turnpike where it paralleled the old canal. But after that it was all a blur until we reached South Dakota. There we hit the Badlands. Why they call it the Badlands struck me as strange. It was beautiful, in an eerie sort of way. Though I suppose in the early days it would have been a terror to traverse. Those jagged hills and rocks, though pretty to look at, would have been daunting on horseback or in a horse drawn wagon or carriage.
Emerging from the Badlands, we made our way to the nearby monument, Mount Rushmore. I think that our expectations always suffer a set back when it meets reality, especially as regards visiting someplace you’ve only read about or seen pictures of. It’s a time like this when you realize that the writing or the picture was taken from a better perspective than what you experience at first sight. Old George, Tom, Teddy and Abe seemed small and distant. My Dad’s binoculars helped, but they also revealed the long grooves in the rock face, the “brush strokes” as it were of those that sculpted their visages from the rock.
The next memorable stop was at the site of Custer’s Last Stand in Montana. But probably most memorable because there wasn’t much to see – a small monument and a hill covered in sagebrush. We were all a little disappointed, and maybe us kids moreso. We had visions of marauding Indians dancing in our heads.
We were able to hasten on our way aided by the “reasonable and proper” [i.e. no] speed limit in Montana. We came into Washington through Spokane, crossed the state, traversed the Cascades and descended into the promised land of the Puget Sound area – the promised land of “nicer customers.”
Ha!

3 responses to “Seeing the [Upper) USA in a Chevrolet”