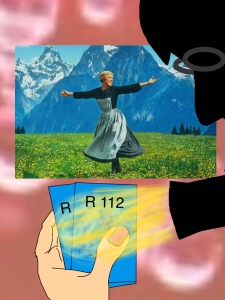 Our uniforms weren’t the only things blue. Part of the General Cinema identity, or “brand” as it’s called nowadays, were the shadow box screens in all their auditoriums. Gone were the heavy drapes or curtains hiding the screens during the intermissions. Recessed rondell lights bathed these boxes and the screens in a cool blue, a shade or two lighter than our uniforms. And a blue colored film leader was run before each feature presentation in which an animation of the GCC logo, the letters G and two Cs grouped in a form mimicking a film projector, accompanied by a catchy drum bumper.

Hung above the entrance to each auditorium was the word CINEMA, followed by a Roman numeral.  In Brockton’s case this was only I or II. The numerals were on hooks, so they could be taken down and the auditoriums swapped, dictated by which film was pulling the larger crowd. You see, Cinema II was half the size of Cinema I.

That is until The Sound of Music opened. According to its contract it was a road show, or reserved seat engagement. To that end auditorium II was selected, and there it stayed, week after week after week. Each seat was given a small metallic plate with a letter for the row and a number for the seat. The center sections had one numbering system and the sides another. And ushers became more important than ever. The customers selected their seats at the box office, and we helped them find the right ones.

Though our run was subrun to Boston, it was exclusive for the whole Southshore area. And it seems the whole Southshore came. By October 6 of 1966, we celebrated the 50,000th person to buy a ticket (the winner received some passes to a future show). My Dad also made it a practice to pass in for free to The Sound of Music any nuns attending in their habits. Word got out and we soon had nuns sprinkled throughout the performances.

Some one came up with a brilliant idea for an item to sell at the concession stand to the Sound of Music customer.  To anyone familiar with the film, they will remember the scene with Captain Von Trapp, Max and the Baroness sitting by the lake sipping pink lemonade. This scene is just prior to the intermission. So when the lights came up and the people trekked out to the concession stand they had something else to drink besides “tonic” (Eastern speak for soda pop), something else to enhance their movie-going experience – pink lemonade. And it was just like in the movie.

The Baroness – “Not too sweet, not too sour.”