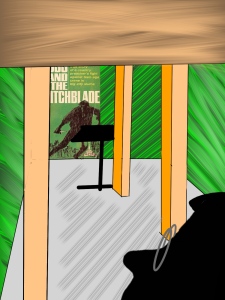 I do know who invited me to the Baptist church in Salem – one of my best friends did – Steve, or Moony as he liked to be called. I guess to say that he wore his hair in a crewcut would be an oxymoron, for there was no hair to wear. From the back his head looked like Charlie Brown’s noggin, a full moon rising. I remember thinking it odd that he would choose Moony as a moniker what with the practice then of mooning someone had a wholly pejorative meaning. But then again there is a certain coolness in having a nickname, and being known among the guys by a name of your own choosing.

The church had a good size sanctuary, but the prominent feature at the front, and center stage, obviously was the baptism.  It looked to only accommodate one person at a time, so it would have been a slow process, but I am sure buckets of sin were washed away over the years of its use.

Anyway, Moony invited me to his church by way of his Boy Scout troop that met there. I joined the troop, starting as a Tenderfoot, eventually reaching First Class.  Scouting appealed to my spirit of adventure, especially in the activities to earn my hiking merit badge. We covered the county north of Salem.  Our routes were never on trails, only streets, roads and in some cases railroad tracks (I know, visions of Stand By Me may be conjured up, but that would be anachronistic, from my viewpoint it was more like Follow Me Boys). One time we hiked to a lot in the country with the whole troop and prepared a meal, I think stew.  We didn’t camp out for the night, at least I don’t think so. It would not have been an optimum site for that.  It was set in a ravine in a grove of tall pines; the ground was not level anywhere, so pitching a tent would have been problematical at best.

I did spend the night at another time somewhere up in this area. Moony had invited me to a retreat that was sponsored by his church. I only remember the large common room, which probably doubled for other functions, dining area, activities, etc. There were pillars everywhere, so some activities were restricted. This is where we heard our speaker. He was from Brooklyn, a former gang member, in fact the warlord of the infamous Mau Maus – Nicky Cruz. He told us about a young pastor who had confronted him with the love of Christ. When Nicky threatened him in return, the pastor held firm in declaring the love of the Lord. He thought he was tough, but God was tougher still, His love overwhelmed him. His story was striking, noncontestable.

Another seed. But the soil of my heart was still unprepared. Providentially in the past I had been kept from an association that would have led me astray. And here I was being invited into the only way, and only I could make the choice, but couldn’t. Not yet.

One response to “Moony and the Baptists”