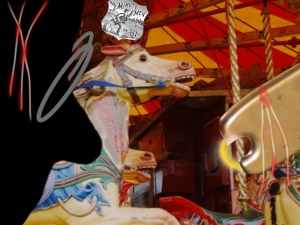 As I mentioned before, the smokestacks of the Salem powerplant were visible from my room in the Lafayette street apartment.  They were sentinels to that other area across town that led out to Salem Neck and to the place where my father had grown up – the Salem Willows.
The Willows was a seaside resort, a magnet to people seeking amusement and a cool breeze in the dog days of summer. A large parking lot separated the greenery of the park on one side from “the Line” on the other. “The Line” was a string of businesses: restaurants, penny arcade, merry-go-round, the whip and bumper cars.  A couple of the attractions were called by other names.  The merry-go-round went by the moniker, the Flying Horses, complete with a brass ring dispenser; and the bumper cars were called instead the Dodgems. The penny arcade had all sorts of mechanical contraptions – some that vended penny postcards of anything from pictures of planes and ships to Hollywood movie stars, and old fashioned Mutoscopes which at the turn of a handle gave you a flickering glimpse of old silent films.  I favored the penny postcards.  There is something about being able to take away something tangible with you that is appealing (Hello – souvenir?).
At the end of the line there was a long pier that ran out into the ocean. And you traded the smells of popcorn, hotdogs and taffy for the brine of the sea. For from the pier people fished and tied up boats or caught a harbor boat to Marblehead or Beverly or one of the islands off shore.
If you followed around to the right of the pier, past a small beach you would wind up in Juniper Point, a residential neighborhood.  My father had lived in various homes in this area throughout his growing up years. It was the place where I witnessed the Horribles Parade, an event held annually on July Fourth.
This particular year my dad collaborated with some of his old high school buddies to run a float in the parade. A float in a Horribles Parade is definitely not what you would ordinarily consider a float – no rose-petaled New Years Day in Pasadena wonder. Instead it is usually something outrageous.
Their float consisted of a hospital bed mounted onto the back of a flatbed truck. One of them dressed as a patient lay on the bed and was surrounded by the others garbed as surgeons. And the surgeons were continuously extracting bowlfuls of “guts” (spaghetti in blood red sauce) from their patient and flinging them over the crowd. I know. Horrible.
It made me squeamish. It felt more like Halloween than the Fourth of July.  And yet.  It was in this sense patriotic, it was a celebration of freedom of speech, even to the extent of being offensive.
Advertisement