Another remarkable memory for me took place in the dark.  Well, not totally in the dark, for my view in front was quite bright at times.
It was a couple of years after we moved the second time from the West Coast back to my father’s home town of Salem, Massachusetts.
He landed a job driving truck for the Salem Laundry.  And soon added a part time job as assistant manager at the Paramount Theater, where, incidentally he had been an usher when in high school.
It was the first movie palace that I had ever been in.  The box office was on the street in the center of the entrance, and a long red corridor lined with glass enclosed movie posters led at last to the lobby.
The auditorium beyond that was what blew me away. It was vast and I felt so small.  The decor I learned was French renaissance. Rich drapes and terra cotta designs accented the walls on both sides.  I don’t remember a chandelier on the ceiling. I believe it was a smooth expanse with a picture frame around the whole.  Which would make sense since my father told me that in the old days the auditorium lights would dim, the light blue of the ceiling would darken and stars would twinkle.
But not in that era.  The Paramount theater in Salem was sub-run, playing behind Boston and Lynn.
Any way, for some reason that day my Dad brought me in with him. And while he worked he deposited me all by myself in the balcony.  And I mean no one else was there.  I took a seat in the middle of this vastness and waited.  It was possible that some people were on the main floor, definitely not visible from my eyrie.
Then the music commenced. A lush orchestral sound laced with kettledrums. Maurice Jarre prepared me for what was to come. There were two sets of curtains; one that parted and another, transparent, that lifted.
Our view from the opening looked down from an high vantage point onto a concrete courtyard.  (My vantage point was higher still). A young blond man crossed and recrossed that ordinary space, preparing his motorcycle for a ride.  And we were off.
I was dreaming while awake.
A tragic accident and a search for the reason behind a life ensued.  I was immersed in the desert and the images of Lawrence of Arabia.
I told you it was bright at times.   Scorching.
The power of movies in part is living vicariously. And perhaps more so for a ten something. Here were adults caught up in a grand adventure, and here I was, also immersed in the sweep of things. And grappling within, with the issues of war, life and death. Some of it down right scary.
I came away with a deep appreciation of cinematography, though I don’t actually think that I could have put that name to it then.  I just knew that through the artistry of those behind the camera a desire was birthed in me. A desire? No, a longing to be where they had been; to experience what they must have felt.
And on the flip side of that, to be able to create a similar experience in the lives of others. 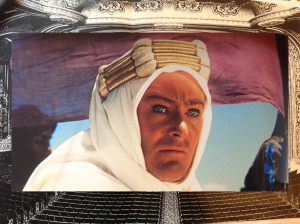 One response to “Memories in the Dark”